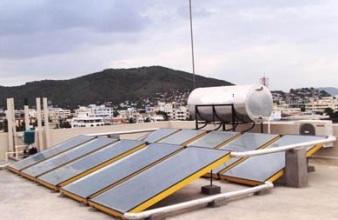 Karnataka’s solar law from 2007 has been facing opposition lately. The decree requires developers to integrate solar water heaters in houses of 600 ft2 and above (56 m²) which are newly built on plots of at least 1,200 ft2. Satyanarayana Udupa, General Secretary of the farmer’s association “Bharatiya Kisan Sangha”, says that their association has asked the state government to make an exception in case of the coastal district. Purchasing a solar water heater was a costly affair considering the moderate to low income levels of rural compared to urban areas. The association also complained that solar hot water was only available for 6 to 7 months. Udupa says that in the coastal region, people do not use hot water during three months of the summer, and there is no sunshine during monsoons, making solar water heaters useless during that period as well. The photo shows an installation on the top of a block of flats in Bengaluru, Karnataka state.
Photo: Malaviya Solar Energy Consultancy

The Karnataka Electricity Regulatory Commission (KERC) said that without the mandatory law in place, it would prove difficult to meet the high electricity demand in the morning. Simply turning on electric instant geysers or electric storage boilers simultaneously when most people take a bath with hot water early in the day causes peak loads. According to KERC, the state population’s electricity demand is 60.64 MWh. Supply falls about 15% short of that value. Solar water heaters were seen as the best measure to resolve the situation.

Under orders from the government, the Bangalore Electricity Supply Company (BESCOM), the local utility of the city of Bangalore, has now devised strict norms for implementing the mandatory law. Failure to comply with these norms will lead to either no or only temporary connection to the electricity grid. As a result, many are moving into their new homes on temporary power connections – a good thing for BESCOM, whose tariff for temporary electricity connections is nearly double as much as for permanent ones.

Also, if new houses are found to be without an SWH, but have permanent power, the executive engineers, assistant executive engineers and assistant engineers involved in the construction project will receive a suspension order. This has virtually stopped BESCOM engineers from processing requests for permanent connections altogether, leaving applications to pile up in large numbers.

A BESCOM official who did not want to be named said that the mandatory rule had definitely benefitted Demand Side Management and that the present situation required more public awareness campaigns about the advantages of SWHs. The capital subsidy that has been extended by the federal government was sufficient enough to make SWHs viable.