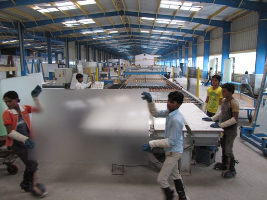 In the Union Budget for financial year 2011-2012, which began at the first of April, Indian Finance Minister Pranab Mukherjee granted full exemption from basic customs duty to importers of raw glass and toughened glass used in the photovoltaic industry. Some of the solar collector manufacturers found this unequal treatment difficult to accept, because PV modules and solar collectors use the same low iron glass, only in different sizes and thicknesses.
Photo: Borosil Glass Works

According to the Bureau of Indian Standards (BIS), the average collector glass is 2 m2, whereas commonly used PV glass is smaller in size. The glass imported in the size of PV modules would therefore not match collector requirements. The share of cost of glass in a PV system, however, is marginal compared to the one in a solar thermal system. If the same exemption had been extended from PV systems onto solar collectors, it would have led to cost reductions in manufacturing the latter.

In addition, more than 90% of the glass used in India for solar energy applications has, so far, been imported as raw glass, then processed and tempered locally. Therefore, the many local glass processors now fear the impact of cheaper imports of tempered glass from China. “Until now, India’s PV module and collector manufacturers have preferred locally produced solar glass, because they can always keep an eye on the quality,” Shreevar Kheruka of Borosil Glass Works explains. Borosil is the only Indian low iron glass manufacturer for both solar electricity and solar thermal applications. “To stay attractive for our customers, we are going to have to adjust our prices to the lower import costs,” concludes Kheruka. And, the consequence of such a development seems crystal clear: The national glass industry has to reduce their margin to remain competitive in the future.