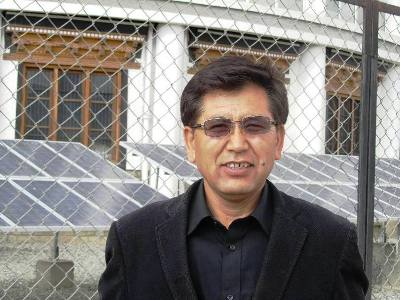 Ladakh – the land of high passes – is a high-mountain area in the northern Indian state of Jammu and Kashmir. Devoid of fossil fuels, the region receives its fuel wood and timber from Kashmir, while diesel and kerosene come from other parts of India at triple cost. But with 2,190 to 2550 kWh/m², Ladakh has also the highest annual solar radiation across the country, which is why solar energy is rapidly becoming a way of life. The region has commissioned close to 12,000 m² of collector area in recent years and has about 4,500 solar dish cookers, 10 solar steam cooking systems and more than 500 solar thermal dryers for food processing. All of this has been made possible by Jigmet Takpa (see photo), Project Director at the Ladakh Renewable Energy Development Agency (LREDA). Takpa is working together with the Indian government under its solar mission programme, and its agency received Indian Rupee (INR) 4.73 billion (EUR 60 million) of special funds from the Ladakh Autonomous Hill Development Council (LAHDC) development scheme.
Photo: Malaviya Solar Energy Consultancy
With a population of as little as 300,000, Ladakh has the highest solar water heater density in India (0.07 m² per inhabitant). According to LREDA’s statistics, the total of 11,831 m² is divided into 7,974 m² for residential purposes, 2,668 m² for hotels and 1,189 for hostels. Takpa states that “our ultimate aim is to provide the entire population with solar water heaters, including the tourists.” So far, a quarter of the 300 hotels use solar energy and LREDA has plans to include all of them over the next three years.
The project director is confident that Ladakh will show the world how all of the hot water needs of a region can be met by solar energy. This means an ambitious 150,000 m² of collector area, assuming an average of 0.5 m2 per inhabitant. LREDA has already received additional grants for 10,000 m2 of collector area to be installed in the near future.
LREDA’s publicity campaign already started in 2009. Instead of manufacturers selling their products directly to customers, LREDA began with a massive awareness-raising campaign on the radio, accompanied by a personalised letter to every hotel owner, village head and district development officer.
The key message was the 60 % subsidy from the national support scheme. Simultaneously, the agency invited tenders from manufacturers, emphasising system quality assurance. A sum of 5 % of the system cost was reserved for a five-year operational guarantee by the manufacturer. This money would be released if a system were to operate successfully for five years without any interruption. Subsequently, LREDA set up a training module for the installation and monitoring of the systems. The solar collector tenders, supply, installation maintenance and financing have made LREDA a key institution on the solar thermal market. The consumer was thus protected and the acceptance of this model underlined the success of LREDA.
At the current speed, it would not be a surprise if the attractive holiday region of Ladakh, which is witnessing an annual increase in visitors by 47 %, will soon become a tourist attraction as one of the world’s most famous solar regions.
More information:
Ladakh Renewable Energy Development Agency: ladakhenergy.org/
Ladakh Autonomous Hill Development Council: leh.nic.in/pages/lahdcl.html