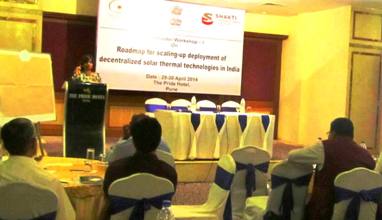 Whereas India shows enormous demand for thermal energy in the industry and for cooking, solar thermal has so far only covered 0.2 % of the total heating and cooling need. Therefore it is urgent to scale up the use of decentralised solar thermal technologies. Supported by the Shakti Foundation, consultancy Greentech Knowledge Solutions (GKSPL), located in New Delhi, will prepare a roadmap for scaling up deployment of decentralised solar thermal technologies in India. With plans to publish the roadmap by October 2014, GKSPL organised the first stakeholder workshop in Pune at the end of April, gathering around 40 experts mainly from the solar thermal manufacturing business.
Photo: Jaideep Malaviya
According to basic research undertaken by GKSPL, heating and cooling makes up 64 % of the total thermal energy of 421 million tonnes of oil equivalent (Mtoe) used in India. The two main sectors are industrial process heating (61 % of the aforementioned share) and cooking with 38 %; 28 % of the process heat requirement is below 250 ˚C. The cumulative capacity of decentralised solar thermal in India installed until December 2013 was nearly 5 GWth, comprising 7.2 million m² of solar collectors, about 40,000 m² of solar concentrating systems, 700,000 units of solar cookers and nearly 10,000 m² of solar air heaters. Hence, the technology accounts for 0.2 % of the total heating and cooling need. According to estimations by the Indian government and GKSPL, energy demand in the cooking sector is expected to increase fivefold and the one of industrial heating, ventilation and air-conditioning (HVAC) is expected to increase 7.5-fold by 2032.
Six strategic focus areas
During the first part of the stakeholder workshop, the organisers presented the basic structure of the roadmap, which consists of six strategic focus areas:
The study will also cover four broad sectors:
During the discussion, the stakeholders identified the following major requirements across all four sectors – residential, industrial, commercial and institutional, and agricultural:
More information:
http://www.gkspl.in