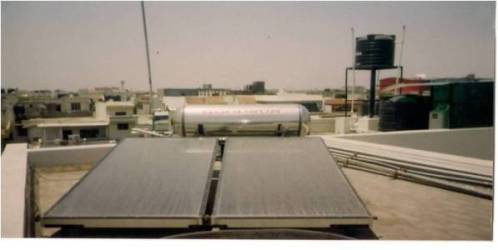 India’s first Clean Development Mechanism (CDM) project with solar thermal technology was formally registered on 12 November 2010 by the CDM Executive Board of the United Nations Framework Convention on Climate Change (UNFCCC) in Germany. The CDM project, which bundles 15,000 small-size solar water heaters such as the one on the photo, was submitted by Indian developer G.K. Energy Marketers Pvt Ltd. Nearly 15 months passed between submission and registration.
Photo: Jaideep Malaviya

The respective systems range from 2 to 10 m2 and were delivered by 26 different collector and tank manufacturers located in the Indian states of Karnataka, Maharashtra and Gujarat. The total installed collector area adds up to 64,000 m2. The project developers of G.K. Energy Marketers themselves paid the fees of EUR 100,000 – none of the industry partners were asked to invest or shoulder the risk. Only legal charges were recovered from the manufacturers.

This is a big step ahead for the Indian solar thermal sector, because the solar water heating industry has so far stayed away from CDM projects due to high transaction costs, a tedious bureaucratic process and the complexity of system testing & monitoring. According to solar thermal manufacturer Akson’s Solar, the system supplier benefits financially from the CDM project with close to 625 INR/m2*year (10 EUR/m2). The manufacturer pays a certain fraction of the amount to G.K. Energy Marketers according to a previously agreed arrangement.

The crucial part of the submission process revolves around how to calculate the electricity saved by running the solar water heaters. However, G.K. Energy Marketers does not want to give any further details. Project leader Gopal Kabra confirms that, “the method for calculating the electricity savings convinced the validators and, subsequently, also the UN officials.” The CDM mechanism depends on the frame conditions – radiation and electricity production – of each state. Several studies in India have shown that every m2 of installed solar collector results in annual electricity savings of nearly 0.6 MWh.

But the most important point: G.K. Energy Marketers will continue as a facilitator for the sector. “We have started registering projects on a state basis”, announces Kabra. It means that this first CDM project has opened the gateway for small and micro size manufacturers and installers to reap the fruits of CDM.