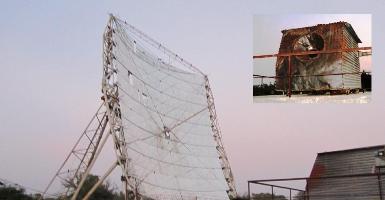 A spiritual hermitage in Gujarat state, in the northwest of India, has become the home of the country’s first solar-powered crematorium. At the ecologically conscious Muni Seva Ashram, a 50 m2 Scheffler Dish will heat the oven which burns the dead bodies. The project was developed in cooperation with Wolfgang Scheffler (who designed the Scheffler mirrors from Germany) and Ronnie Sabawala (one of the owners of Vadodara-based Himalaya Engineering). The Solar crematorium has been installed near Ashram at the “panchayat land” (land managed by the village council) for field testing and demonstration. Although the target temperature is above 1,000 °C, preliminary tests have proven successful. The photo shows the Scheffler Dish on the left and the chamber, in which the body is placed, on the right.
Photo: Jaideep Malaviya

The idea was conceived in 2005, in which Raman Panwala from the coastal city of Valsad visited the International Center for Networking, Ecology, Education and Reintegration (ICNEER) set up by solar thermal energy expert Deepak Gadhia. When Panwala was shown that a piece of wood starts burning while placed in the sun, he wanted the same concept applied to human bodies being cremated according to Hindu mythology (who burn their dead). The ceremony typically consumes an average of 200 kg of wood per body.

Deepak soon started to work on the concept and estimated total project costs at around INR 5 million. Panwala did not have enough cash at hand, but managed to gather funds from his village by convincing the villagers that trees could be saved if human bodies are burned using solar thermal energy. Deepak then chose Muni Seva Ashram as the site for the pilot project. Next to the platform on which the cremation chamber was placed, facilities were set up at which to carry out all the usual rituals for the dead body first. The process also involves collecting the ashes after cremation, so that the relatives can immerse them in water.

Tests with small pieces of meat proved to be encouraging. However, Ashram will not be able to put the solar cremation chamber to use until a biogas-backup burner is installed. People across the region made clear they will welcome the chamber if a backup burner takes over operation during cloudy hours. Otherwise, a body may only be half burnt, hurting the sentiments of relatives.

Ashram is now searching for an eco-friendly solution with biogas, which is produced in a farm 30 km away from the solar crematorium. As soon as the funds for the biogas backup are available, the bottled heat source can be delivered and the solar crematorium can finally start to operate.