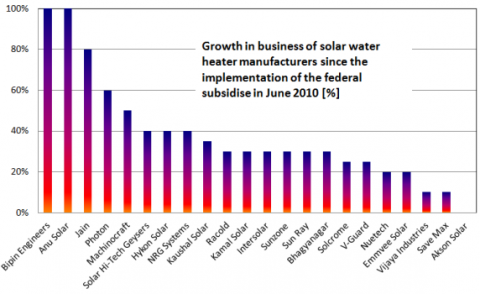 There are always two sides to each story: On the one hand, the 30 % investment subsidy scheme has brought most solar thermal system suppliers enormous growth rates since it was implemented by India’s federal government in June 2010. The chart above shows the results from a survey carried out by the Indian Malaviya Solar Energy Consultancy among the leading 22 Channel Partners. These 22 partners control almost 70 % of the market. On the other hand, the same Channel Partners must put together a minimum of 1,000 m² of collector area before being able to claim subsidies from the Ministry of New and Renewable Energy (MNRE) on behalf of their clients. This has put a lot of pressure on the pre-financing capacities of manufacturers which barely have the money to grow. In addition, Channel Partners with even superior rating are required to apply for a minimum of 10,000 m² per subsidy claim.
Figure: Malaviya Solar Energy Consultancy

It is easy to explain how this happened: The Ministry wanted to reduce the administrative burden of disbursing subsidies to individuals, so it approved a certain number of Channel Partners among solar water heater manufacturers and system suppliers. They now disburse the subsidy directly to the end customer and reduce the final invoice by Indian Rupees (INR) 3,000 per square metre. Therefore, a typical 1,000 m² application requires a total credit volume of up to INR 3 million (around EUR 42,000). The MNRE usually pays out the Channel Partners three to four months after the system is installed. The delay is a result of thorough checks of all applications, carried out randomly in between by third parties on site, and of the involvement of more than one MNRE department in administering the subsidy scheme.

The high pre-financing burden has now prompted bigger Channel Partners to reduce their sales activities. The above-mentioned survey asked the Channel Partners how they would solve the current challenges and what they would do to speed up the disbursement process. The following lists some of the more common measures on which a majority of the interview partners agreed:

Other suggested measures were:

Channel Partners with superior rating also asked forthe one-time application capacity to be reduced to 5,000 m² in contrast to the present 10,000 m2. This would bring more financial stability to their balance sheets.

There are also several regions across the country in which no Channel Partners are present. In these regions, customers can buy systems from selected banks through soft loan schemes. The Channel Partners called for an increase in the number of these banks and financial institutions to make it easier for customers to receive financial assistance. Officials at the MNRE, however, feel that a large number of separate applications to claim individual payments will increase the administrative workload again.

Feelings were mixed when it came to the question of whether to continue the subsidy under such circumstances. Whereas 72 % of the 26 interviewed companies were in favour of continuing the scheme purely based on their business growth, 27 % wanted it to stop to avoid any financial difficulties. If the Channel Partners do not receive the money in due time, it may curtail business growth, which in turn may affect the targets set forth by the National Solar Mission. Taking notice of the situation, MNRE officials have agreed to speed up the subsidy settlement process to keep the confidence of the Channel Partners.