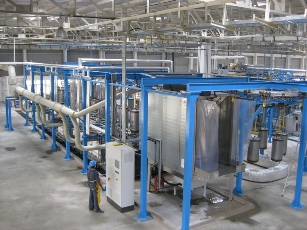 New enamelling factory of Emmvee Solar in India: The plant is part of the new factory and office complex near the city of Bangalore.
Photo: Emmvee

Emmvee Solar is expanding. The Indian solar thermal system manufacturer, brand name “Solarizer”, has just moved into a new factory and office complex near the small town of Dobespet, about 55 km away from Bangalore, where the company was located before. Emmvee invested around Indian Rupees (INR) 1 billion (EUR 15 million) into the building and the machinery of the collector production line, as well as in a tank enamelling factory.

The new site spans across 22 acres of land, of which 10,000 m2 are reserved for production facilities. “The new production unit marks the step from a low-budget producer with cheap inexperienced labour to a high-quality manufacturer with good equipment and trained people,” T. Srinath, the technical director of Emmvee Solar, describes the move. The total number of employees in the solar thermal factory lies around 250. According to the company, this number is likely to go up to 450 by mid-2010.

The new factory has a production capacity of 500 collectors (1,000 m2) and 500 enamelled tanks per day. Emmvee produces collectors with selective and highly selective copper absorber sheets. Presently, collectors possess an extruded aluminium frame. The company will, however, introduce a new and cheaper collector type with a tray at the beginning of 2010.

One of the objectives of the joint venture between Emmvee and Solarcap is to develop solar thermal solutions for industrial sectors, such as food processing and the textile branch. Unlike the dominating thermosiphon systems, these solutions come as forced flow systems using external pumps. Emmvee is also planning to use the partnership with Solarcap to develop solar thermal cooling and drying technologies, which have a huge potential in India.

In order to simultaneously reach residential users of solar thermal systems, the Indian manufacturer, in cooperation with the Indian Ministry of New and Renewable Energy (MNRE), offers interest loans to its customers at low rates. Hereto, the ministry offers loans with a special interest rate of 2 % annually, as part of the programme “Accelerated development and deployment of solar water heating systems in domestic, industrial and commercial sectors from April 2008 to March 2010”. Agents for loans in this support scheme can be either private companies or banks (see more details in this node: http://www.solarthermalworld.org/node/697). The customers can pay back the loan within a period of 5 years. So far, there have been 35,000 customers who benefited from the financial services.