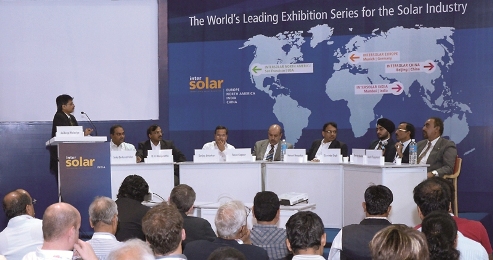 The Intersolar India 2011 was the third of its kind in India. 264 companies joined the conference, which meant an impressive 84% increase in exhibitors this year. According to the organiser, German company Solar Promotion, 5 % of the exhibitors specialised in solar thermal technology, another 8 % showcased both photovoltaics and solar thermal products – but the majority was made up of companies from the photovoltaic sector.

Besides China, India is the fastest growing solar heating and cooling market worldwide. The CEOs attending the conference’s panel discussion called for more efforts by the government to encourage research & development. For the past 25 years, Indian companies have followed the same collector and tank designs, which prompted the statement by D. V. Manjunatha (Emmvee Solar) that, “India needs not simply adopt research carried out by developed countries. The country’s unique local environment requires R&D programmes specifically adapted to it”.

Some panellists also added that solar water heaters (SWH) may have penetrated selected urban regions, but more efforts were needed to popularise solar hot water use in other areas. For example, Sanjay Jinturkar (Sudarshan Saur) said that, “financial support should be given to manufacturers promoting water heaters in under-represented areas.”

Electric utilities play an important role in promoting solar thermal technologies, because the technology saves electricity, which reduces grid load particularly during peak times. All CEOs agreed that the national target of 20 million m2 of collector area installed by 2022 is a challenging, but reachable aim. However, some panellists said that this figure represents just 10 % of the overall potential. They are confident that the future of solar technology in India will look even brighter.

In addition, some panellists mentioned the important role that architects play in designing buildings which favour the integration of solar energy systems. Most customers of the Indian solar thermal industry still come from the residential sector, so architects represent an important target group for the solar thermal industry. They ensure that each individual customer can install a solar water heater without putting too much work into it.

Tarun Kapoor (Ministry of New and Renewable Energy, MNRE) said that special attention will be paid to improving standards and quality in the industry. MNRE will have to come up with some new mechanism. He also called for the industry to join forces, in order to ensure a constantly high system quality.

To further help solar water heaters on their way to becoming a mass product, additional marketing efforts will become necessary, too. SWHs should now be considered an amenity for any building set up in India – just as taps or showers.