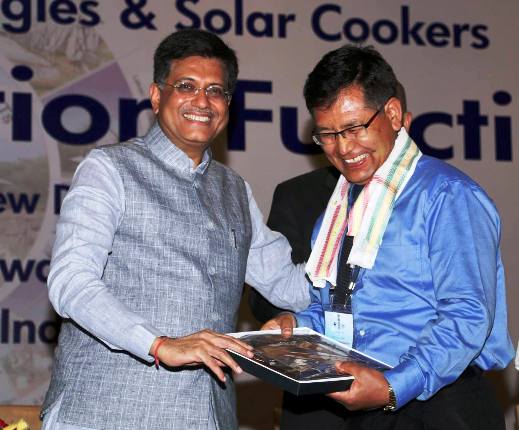 It’s a delight to gaze at the glittering solar panels on virtually every roof in the Ladakh region in the northern Indian states of Jammu and Kashmir. The Himalayan territory enjoys more than 320 clear, sunny days each year and has undoubtedly become India’s leader in solar energy, as 40 % of its population is now using solar water heaters in their homes, up from almost zero per cent back in 2011. The region owes its success largely to the tireless work of the Ladakh Renewable Energy Development Agency (LREDA), which was the only renewable energy agency among the 102 institutions and companies presented with an award by the Indian Ministry of New and Renewable Energy during an April 2016 ceremony. The photo shows energy minister Piyush Goyal (right) presenting the award to Jigmet Takpa, Director of the LREDA.
Photo: LREDA
Ladakh – the “land of high passes” – is a mountainous area devoid of fossil fuels, whose population’s energy requirements are met by fuel wood and timber transported in from Kashmir. Inhabited by a mere 300,000 people, the region enjoys highest annual irradiations of between 2,190 and 2550 kWh/m². Since the LREDA started subsidising and promoting solar thermal applications in 2011, it has supported the installation of 17,584 m² of solar collectors and 2,160 solar steam cooking systems with a total receiver area of 3,120 m². If all went as planned, solar water heaters would be the sole energy source to supply Ladakh by 2018, Takpa told solarthermalworld.org during the award ceremony. Ladakh is jetting ahead to become the first Indian region to not use any fossil fuel or wood for heating water.
The government’s decision to cover between 40 and 90 % of the cost of solar energy devices depending on the beneficiary has sparked interest in the initiative across the board. Schools, residential homes, hotels and guest houses receive a 50 % subsidy for solar equipment, whereas government offices can get a 90 % subsidy for installing solar energy systems. Accordingly, almost all hotels use solar energy for their hot water demand. Solar-heated greenhouses for vegetable production have also been subsidised with 50 % of the investment costs.

New generation of solar-heated greenhouses across Ladakh
Photo: Jaideep Malaviya
3,500 solar-heated greenhouses to increase vegetable production
Greenhouses have been an important pillar of nutritional supply to Ladakh’s population. However, the extreme weather conditions – short summers and temperatures in winter dropping to -25 °C – make it difficult to harvest vegetables. This prompted the development of a new generation of solar-heated greenhouses using three insulated mud-brick walls, and a south-facing area coated with plastic or made of glass set at a 45° angle.
The thermal mass of the north wall was augmented with black-painted barrels filled with water. They were placed in front of the north wall inside the greenhouse, so that the irradiation coming in from the south side directly hits the barrels’ surface. This method keeps the indoor temperature at a level sufficient for cultivating vegetables even during harsh winters. The new greenhouses are providing eight times more vegetables than before and farmers have seen their incomes rise by 30 % when using the new installations. There are over 3,500 units which have been successfully set up all across Ladakh.
http://ladakhenergy.org/