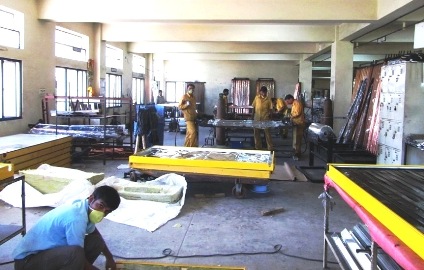 The international press praised the Indian Finance Minister, Arun Jaitley, when he unveiled this year’s Financial Bill, including the 2015/2016 budget, on 28 February. For example, the BBC wrote: “A business-friendly budget aimed at attracting greater investment for the economy.” It has been the first full-year financial budget since the National Democratic Alliance came to power in May 2014. Solarthermalworld.org took a look at some of the regulations relevant to solar thermal and found in Jaitley’s budget for financial year 2015/2016, which starts on 1 April 2015. The photo shows the flat plate collector production unit at Anu Solar.
Photo: Jaideep Malaviya
Taxes on coal have been doubled, from Indian Rupee (INR) 100 to 200 per metric ton of coal. The tax revenues will be used to support sustainable energy technologies, including renewable energies, which means that the around INR 120 billion (EUR 1.7 billion) of additional revenue per year will go to the already established National Clean Energy Fund. It, however, has not been clear yet how the solar thermal sector will benefit from this move.
Customs duty on steel imported to the country has been raised from 10 % to 15 % in order to protect domestic manufacturing. As India’s annual output of close to 100 million metric tons make the country the world’s fourth largest steel manufacturer, acquiring domestic steel will not pose a challenge to the nation’s solar thermal industry.
Three-target layer vacuum tubes exempt from customs duty
The new Financial Law stipulates that evacuated tubes are exempt from basic customs duty from 1 March on. Previously, basic customs duty on tubes ranged between 7.5 % and 10 %, depending on the HS (Harmonised System) code the product had been imported under. The recent exemption will result in reduced costs for the final product and will probably accelerate the transition towards vacuum tube systems in the residential sector. As defined in the Standard for All Glass (Glass in Glass) Evacuated Solar Collector Tubes from May 2013, customs duty exemption requires a “three target coating having three layers – absorption layer (aluminium nitride), bonding agent cum absorption layer (aluminium nitride – stainless steel) and anti-reflection layer (copper)” (see the attached standard, page 4).
International coating experts have criticised this kind of quality requirement: “The type of coating, whether single or triple-target, or even 9- or 14-level, is not as decisive, actually. The quality of manufacturing is what counts above all else,” Wolfgang Graf, Head of the Development Group for Coating Technologies and Solar Thermal Systems at Fraunhofer ISE, said in Freiburg during an interview with the international magazine Sun & Wind Energy a few years ago. “The difference in the materials used is not as important as process control and operator training.”
More information:
indiabudget.gov.in
Download Financial Law 2015: http://www.indiabudget.nic.in/ub2015-16/bs/bs.pdf
https://solarthermalworld.org/wp-content/uploads/2015/03/india_financial_law_2015_changes.pdf
https://solarthermalworld.org/wp-content/uploads/2015/03/vacuum_tube_standard_india_2013.pdf