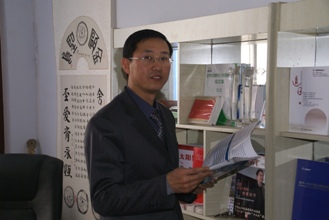 Hongzhi Cheng is Deputy Secretary-General at the China Solar Thermal Industry Federation (CSTIF), based in Beijing, and Head of the company The Sun’s Vision, located in Dezhou, Shandong province. He has had more than 15 years of experience in the solar thermal sector – first in the industry, and with The Sun’s Vision since 2006. His team, which consists of thirty people, has been responsible for a number of publications: books, a monthly magazine and the websites http://www.21tyn.com and http://www.CSTIF.com. The Sun’s Vision carries out the annual market survey of the Chinese solar thermal market. Solarthermalworld.org met Hongzhi Cheng in his office in Dezhou.
Photo: Bärbel Epp

The solar thermal industry in China is huge and includes more than 2,000 companies. How do you manage to analyse annual market volume?
Cheng: We do our research in two ways. First, we directly ask the solar water heater manufacturers for their production figures. We crosscheck these basic figures with numbers from a survey among suppliers. For example, we ask suppliers of parts for the top and bottom of the storage tank about their production figures. Based on these figures, we can calculate the number of tanks that were produced in a given year. Simultaneously, we also ask manufacturers of mounting systems for their delivery numbers. This is roughly how we get close to our final data.

How do you question the companies and how many?
Cheng: We survey around 300 companies, which are responsible for 95 % of the total annual sales volume. The other around 1,000 solar water heater suppliers seem negligible for overall market statistics, because they come and go, and sell poor-quality products. We send the questionnaire in writing to the relevant 300 solar water heater manufacturers, as well as to the supply industry. We also call these companies and encourage them to actually fill out the questionnaire. What helps us is the fact that we have a close relationship with many of the manufacturers and they trust us to treat their company data strictly confidential. In addition, we receive information from the relevant government departments, which we use to crosscheck and confirm the company information.

Do you already have the final figures for 2011?
Cheng: We carry out our survey each year in November, so that we can present the market figures for the current year at the CSTIF association meeting in December. The newly installed collector area for 2011 was 57 million m2, showing a 16 % jump compared to the previous year, in which we reported a market size of 49 million m2.

The bigger players in China are growing faster than the market. Is there a concentration present?
Cheng: If we look at all solar thermal manufacturers in China, there are the top five companies with an annual turnover of more than Renminbi (RMB) 2 billion and then there are the others, which are much smaller. The Big Five – Linuo Group, Himin, Sangle, Sunrain and Micoe (with the latter two belonging to the same company group) – are very professional companies offering well-known solar brands. Sunshore ranks sixth place, with a turnover of around RMB 500 million. All of these companies have good distribution channels, after-sales service and technical support for resellers. This means a big advantage, which makes them grow much faster than the market. Really small companies, on the other hand, vanish quickly.
Altogether, there are about 100 enterprises which have standardised the way they assemble solar water heaters. The market share of these popular brand products has increased from less than 40 % to 70 % in recent years.

I want to point out that these companies have grown just by natural demand among the population. There are no subsidies paid as in the PV sector. Very recently, within the last two years, there has been a subsidy programme for the rural area, which supports rural households by exempting them from the 13% VAT rate when they purchase electrical appliances. However, this subsidy only applies to a very small fraction of the market. In 2011, the country subsidised around 1 million solar water heaters – around 3 million m2, which means only 5 % of the total solar water heating market in this particular year.

Will the rural subsidy programme be extended?
Cheng: Some of the regions and rural cities have already stopped the programme, which was foreseen only over a period of two years. The remaining programmes will be halted in the second half of 2012. Still, there are other support mechanisms for renewable technologies, which will now become more visible, such as the Renewable Energy Demonstration Cities Programme that started two years ago. However, these policies do not focus on solar thermal, but on a wide range of renewable technologies instead. There is another scheme that is promoting solar thermal systems: A fair number of rural cities support solar thermal systems on welfare and public institutions, such as old people´s homes, orphanages or public swimming pools, with an investment subsidy of 30 %.

Will the rural market slow down after all?
Cheng: I do not think so. There is still a lot to do in the rural areas. Only 30 % of the market demand has been met in this area. We assume the rural segment to grow to RMB 600 billion. Today, it is around RMB 100 billion. Large-scale solar thermal systems in cities and in the industry have an even larger market potential, which could reach thousands of billions of Renminbis.

Can solar process heat develop without subsidies?
Cheng: Because the central government has set a number of restrictions for industries in terms of energy- and emission-saving, these clients will come to accept solar thermal more and more. Especially industries which consume a lot of energy now have tighter regulations. For example, with the help of energy contracting, Jiangsu province has already seen more than ten solar pre-heating installations in dye and textile factories over the last two years.

This February, the China Securities Regulatory Commission has approved Sunrain’s application to be listed on the Shanghai Stock Exchange. Will we see some more IPOs of solar water heater manufacturers in the near future?
Cheng: We have heard of five companies – Sangle, Sunshore, Himin, Sunrain and Fivestar – which plan to be listed on the stock market. However, I think that only two companies will actually be admitted: Himin and Sunrain. It is very difficult to get government approval if you are only producing and supplying solar water heaters. You may have more luck if you also offer high-temperature and solar power applications.

Do European solar thermal system suppliers have a chance in the Chinese market?
Cheng: We have a very large market. So far, only a few European players have set foot on it, mostly as material providers, for example, for flat plate collectors. If you’ll start in the market today, you’ll be big in 2 or 3 years. The only thing these companies really need to know is how much a typical solar thermal system costs on the Chinese market.

The interview was carried out by Bärbel Epp and translated by Yaping Zhang.

The Sun’s Vision is responsible for the content of the association’s website http://www.CSTIF.com and http://www.21tyn.com. For the first time ever, they published “China’s Solar Thermal Development Blue Book 2010-2011” in December 2011, which is said to be updated every two years. The Sun’s Vision has also published the monthly magazine “Sun’s Vision” since 2008, with 20,000 copies per issue.