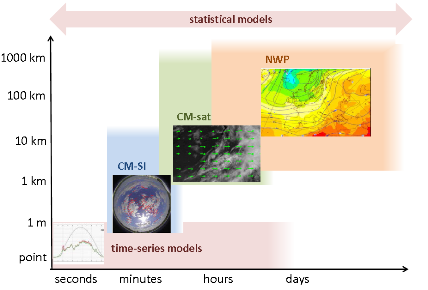 IEA SHC Task 46, Solar Resource Assessment and Forecasting, is an SHC project conducted in cooperation with IEA’s SolarPACES for Concentrating Solar Power and the Photovoltaic Power Systems programme. Accurate assessment and forecasting of solar irradiation is a key issue in planning and operating solar electricity and solar thermal plants. Task 46 has been evaluating various forecasting models and standardisation procedures for irradiation measurement, for example, regarding detail and accuracy. Numerical Weather Prediction and cloud models based on satellite images (CM-sat) with their up-to hourly resolution are detailed enough for rough estimates of solar generation capacities within the next hours and days. Grid integration and power plant control, however, require algorithms based on CM-SI (Cloud Models based on Sky Imaging) time-series modelling to forecast irradiation seconds or a few hours away (see figure on the left).
Figure: University Oldenburg
All in all, IEA SHC Task 46 has 70 scientists and industry experts from twelve states working on the development and evaluation of new methods for solar irradiation forecasting and measurement. The task was launched in 2011 and will run until 2016. One of the project results is the updated Best Practices Handbook for the Collection and Use of Solar Resource Data for Solar Energy Applications, which was published by the U.S. National Renewable Energy Laboratory in March 2015 (see the attached document).
24-hour forecast allows better adjusted fossil fuel backup
Regarding solar electricity, it is obvious that accurate forecasting methods for solar irradiation are of paramount importance. Electricity grid production and consumption have to be balanced every second – the more precise the prediction for solar electricity generation, the easier fossil fuel backup systems or flexible consumers can adapt to it.
Solar thermal systems tolerate much higher fluctuation rates in energy generation. Heat can be stored relatively easily and small differences in energy production, such as the ones caused by the occasional clouds on the sky, will hardly be noticed. But just as solar electricity, forecasts are useful in order to schedule the operation of the fossil backup. The Austrian task members simulated the effect hourly solar irradiation forecasts for one to three days would have on the operations of the solar district heating network in the Austrian town of Wels. “District heating operators have already been using temperature forecasts to predict heat demand over the following days. By adding solar irradiation data, heat demand can be predicted more accurately,” explains Gerald Steinmaurer, Managing Director of the Austria Solar Innovation Center, ASiC. When the sun shines into buildings, solar gains reduce heating demand. And in case of the solar-supported district heating system in Wels, solar yield predictions do provide valuable insights. “The idea is: When the heat storage tank houses little energy, forecasts will enable the operators to decide whether and when operations can be supplied by solar energy only, so as to reduce fossil energy consumption.”
Irradiation forecasts can result in energy savings of several per cent
Even postponing fossil heat generation for a few hours may increase the economics of combined heat and power plants: The produced electricity’s market value is changing by the hour, meaning a plus in flexibility provides more financial opportunities. In Wels, the scientists conducted a simulation study and carried out a field test together with the system operator for a few days, in order to verify simulation results. “The difference in fuel consumption achieved by the new tool, whose calculations are based on temperature and irradiation, in comparison to other available forecasting tools that rely on temperature alone strongly depends on the considered system. But added energy savings of several per cent for common power plants are a realistic goal,” says Steinmaurer. He believes that an operation mode which includes solar irradiation data will be a more interesting choice for new systems, for which data can be assessed from the beginning, rather than for existing systems, whose operators would have to incur additional costs. The task members evaluated several models for solar irradiation forecasting.
Solar yield forecasts help with sizing
Besides near-time forecasting, solar irradiation measurements are also important for solar electricity systems, in order to calculate and control the solar yield of an envisaged or existing plant. There are basically two ways to measure solar irradiation at a certain location. One is a measurement device like a pyranometer, which measures broadband solar irradiance directly on the ground. It delivers accurate data – but only for exactly the location at which measurements were taken. To assess solar irradiation across larger areas, it requires satellites to measure the cloud coverage. Based on the geographical location and the cloud coverage, systems can now calculate solar irradiation which reaches the ground. To improve data accuracy, the Task researchers evaluated models and measurement data from the last 110 years. The aim is to standardise and improve measurements and analyses of irradiation from satellites and pyranometers.
More information
IEA SHC Task 46: task46.iea-shc.org/
ASiC: http://www.asic.at
Blue Sky: http://www.blueskywetter.at/de/home/
Best Practices Handbook: http://www.nrel.gov/docs/fy15osti/63112.pdf
https://solarthermalworld.org/wp-content/uploads/2015/04/handbook_for_solar_resource_data_march_2015.pdf