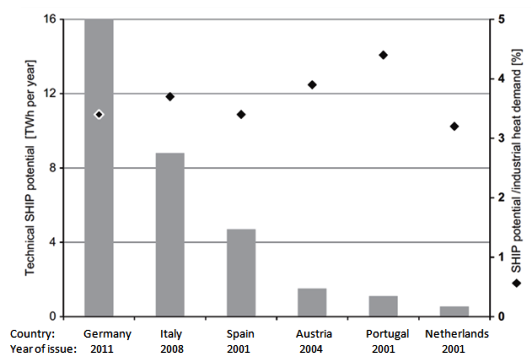 The 191 solar process heat projects which have made it into the online database add up to an installed capacity of 0.11 GWth (0.159 million m²), which is only a small fraction of the potential estimated for this type of application. To quantify the technology’s global opportunities, the researchers from the now-completed four-year Task 49 / IV, Solar Heat Integration in Industrial Processes, analysed the results of several national studies which had tried to determine the potential of solar process heat while considering restrictions such as temperature range and the space available for the systems (see the chart on the left). “For Europe, where mainly non-concentrating collectors had been investigated, the percentage of technical potential for solar process heat related to the total industrial heat demand is around 3 to 4 %,” was the conclusion by the authors of the attached report Potential studies on solar process heat worldwide.
Chart: Task 49 / IV
Some of the studies which the researchers analysed were published between 2001 and 2011 and dealt with the national markets of six European countries (see the chart above). They resulted in a solar share of 3 to 4 %. The total global process heat demand in 2008 was about 98 exajoules (EJ). Consequently, 4 % of technical potential adds up to 3.9 EJ or a collector area of 2.3 billion m² if average irradiation is at 1,200 kWh/m² and year and average annual collector efficiency at 40 %.
The authors consider a 4 % solar share in national industrial heat demand to be a conservative bottom-line estimate. Global potential should be larger for two reasons: In less densely populated countries, space limitations are often not as pronounced as in highly industrialised ones, and concentrating collectors in regions which have greater direct irradiation potential than Europe offer the opportunity to meet demand for applications at even higher temperatures from 250 to 400 °C.
The 3.9 EJ technical potential of solar process heat is indeed a fairly low baseline if compared to long-term forecasts of international roadmaps (see the following table). However, the scenarios end up with strikingly different values, ranging from 2 to 15 EJ annually based on the target year.
Global technical potential of solar process heat from several international studies
Task 49 / IV Solar Heat Integration in Industrial Processes was a joint effort of the two IEA Technology Collaboration Programmes Solar Heating and Cooling and SolarPaces. During a four-year period, 57 participants (one-third with an industrial background and two-thirds researchers) from 16 countries worked together on projects until the end of the Task in January 2016. The complete collection of studies, guidelines and tools published during that time can be found on: http://task49.iea-shc.org/
https://solarthermalworld.org/wp-content/uploads/2016/12/task49_potential_studies.pdf
https://solarthermalworld.org/wp-content/uploads/2016/12/unido_renewables_industrial_applications_2050.pdf