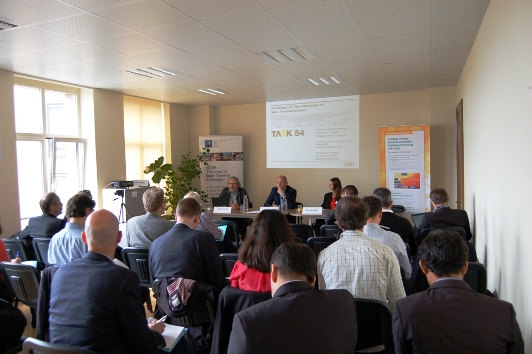 System cost reduction is one of the most urgent challenges of the solar thermal sector, especially in central Europe. The aim of Task 54 of the IEA Solar Heating and Cooling Programme, Price Reduction of Solar Thermal Systems, is to lower solar heat prices by up to 40 %. Germany’s main scientific contributions to the task have come from the two research projects KoST and TEWIsol, which have been co-funded by the German Federal Ministry for Economic Affairs and Energy. The corresponding Task 54 meeting will take place in Stuttgart on 6/7 October (see the attached programme) in conjunction with a workshop on 5 October to present and discuss KoST and TEWIsol (12 p.m. to 4 p.m.; held in German). The photo shows the Task 54 workshop organised in collaboration with the European Solar Thermal Industry Federation in Brussels in May 2016.
Photo: Fraunhofer ISE
KoST (Cost reduction in solar heat by standardised components and interfaces) has been coordinated by the Research and Testing Centre for Thermal Solar Systems (TZS) at the Institute of Thermodynamics and Thermal Engineering (ITW), University of Stuttgart, and follows three strategies to lower costs:
Obviously, the solar thermal industry has been offering a great variety of mounting systems, dozens of different roof hooks and a large number of tanks in different sizes and with different equipment. Now, one idea is to define uniform dimensions for certain components to raise quantities and lower costs.
A fair number of German, Austrian and Swiss companies covering different parts of the supply chain have committed themselves to making KoST a success and have covered the obligatory financial industry share of the research programme, which has been coordinated by ITW/TZS and supported by Fraunhofer ISE and collector manufacturers such as Citrin Solar, Ernst Schweizer, Greenonetec, KBB Kollektorbau, Ritter Energie- und Umwelttechnik, Solvis as well as controller manufacturer emz Hanauer and tank manufacturer Wikora. The installation partners for KoST are the German federation of roofing contractors, ZVDH, as well as the German industry association BSW Solar and the German Institute of Building Technology, DIBt. “We have also invited the federal installer association ZVSHK and the members of heating industry association BDH to the workshop on 5 October,” explains ITW researcher Stephan Fischer, the organiser of the event. As subtask leader of System design, installation, operation and maintenance Fischer´s work within Task 54 has been funded by KoST.
The second German research programme TEWIsol (Techno-economical optimization of solar thermal systems) coordinated by German Fraunhofer ISE is supporting Task 54. TEWIsol aims at using the latest methods for optimising product costs to analyse the solar thermal supply chain, from component manufacturers to system integrators and plumbers. These methods include value analyses, process cost analyses and equipment simulations. Industry partners of TEWIsol are hydraulic component specialist Meibes System Technik and installation company SWB Sonnen- und Windenergieanlagenbau. The work of Task 54 operating agent Michael Köhl from Fraunhofer ISE and the subtask lead D will be financed through TEWIsol.
The 5 October workshop will present TEWIsol and KoST and offer an opportunity to discuss the work programme. The focus of the subsequent Task 54 meeting on 6/7 October will be on the global installer survey on costs and on the results of the Task Force about uniform requirements for levelised cost of heat (LCOH) calculations.
For more information about the KoST/TEWIsol workshop on 5 October, please contact: Stephan Fischer, ITW: fischer@itw.uni-stuttgart.de
For more information about the Task 54 workshop on 6/7 October, please contact: Sandrin Saile, Fraunhofer ISE, sandrin.saile@ise.fraunhofer.de
https://solarthermalworld.org/wp-content/uploads/2016/09/task54-october_meeting_preliminary_agenda.pdf