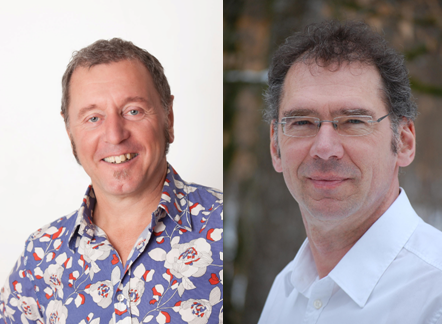 The key to the decarbonisation of the energy sector is new compact storage technology: It will require much R&D to develop market-ready products based on new storage designs with phase change and thermochemical materials (PCMs and TCMs). One strategy is to combine resources within international research programmes – to create platforms unhindered by national borders or scientific disciplines, such as the joint task Material and Component Development for Thermal Energy Storage planned within the IEA Technology Collaboration Programmes. Its two future operating agents, Wim van Helden (left) from Austrian AEE INTEC for the IEA Solar Heating and Cooling Programme and Andreas Hauer from the German Bavarian Center for Applied Energy Research (ZAE Bayern) for the IEA Energy Conservation through Energy Storage (ECES) programme, invite all interested researchers to Vienna, Austria, to attend the second Task Definition Meeting on 15 and 16 September 2016.
The two-day workshop will take place immediately after the Compact Thermal Energy Storage conference, which is going to be held in Vienna on 14 September. This conference will outline the key findings and technical advancements of the latest projects conducting research in the field with the participation of Austrian institutes (see the attached programme in German). The German-speaking event will be jointly organised by AEE INTEC and the Austrian Ministry for Transport, Innovation and Technology.
Focus on materials, component and system design
“We need to conduct more research in order to gain a deeper understanding of PCM and TCM materials,” van Helden described one of the key issues of the new task. The second important research challenge will be to improve components which transport heat in and out from the tank. Consequently, there will be two subtasks devoted to materials and two dedicated to component and system design.
“After our first joint task definition meeting in Graz in March 2016, we have caught the interest of almost 40 researchers from 13 countries. So we decided to divide our work into two fields – PCM and TCM,” van Helden said about the make-up of the task. He added that the subtasks of both research fields were closely intertwined and that cross-collaboration could provide fertile ground for new ideas regarding both issues. The international research team will also be looking into different types of storage – short term and long term, high power or high capacity. The task members are additionally planning to take a look at different heat sources, such as waste combustion, solar thermal, CHP plants and surplus renewable electricity.
Experts are welcome to hold a short presentation during the task definition workshop – an “elevator pitch” to present their work. The workshop will discuss plans, contributions and responsibilities, as well as new developments and the global impact of compact thermal energy storage. Also on the agenda: A timeline and actions for the discussion of the work plan by the Executive Committee, as well as the establishment of actions, milestones and meeting places over the first year.
The new task will be based on the know-how and networks developed during the Task 42/Annex29 Compact Thermal Energy Storage (January 2009 to December 2015), which had been managed by Andreas Hauer and Matthias Rommel, former head of the Swiss SPF – Institute for Solar Technology. Starting at the beginning of 2017, it is scheduled to run for three years, assuming that the Executive Committees of ECES and IEA SHC will give the go-ahead during their meetings in autumn.
More information:
Wim van Helden, AEE INTEC, w.vanhelden@aee.at
Andreas Hauer, ZAE Bayern, Andreas.Hauer@zae-bayern.de
http://task42.iea-shc.org/
More information about the Compact Thermal Energy Storage conference (link to http://www.aee-intec.at/index.php?seitenName=veranstaltungenDetail&veranstaltungenId=346)
https://solarthermalworld.org/wp-content/uploads/2016/08/compact_energy_storage_conference_autria_2016.pdf