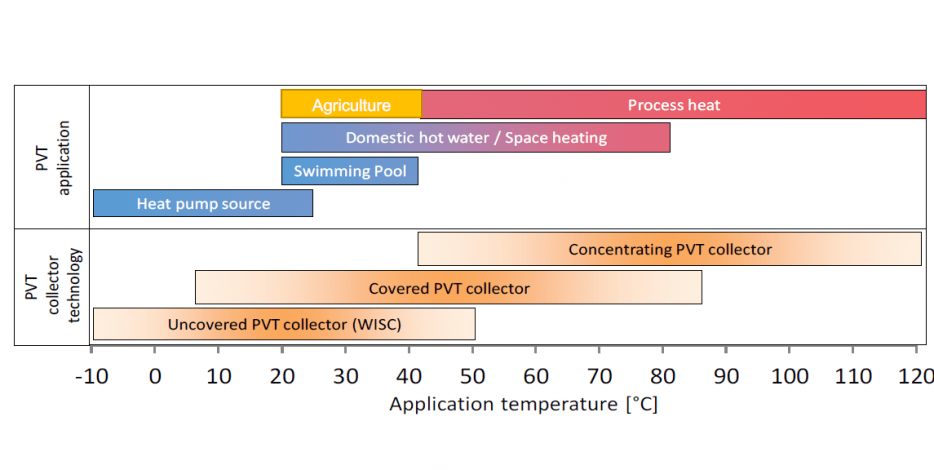 A record 840 people registered for the PVT solutions for buildings and industry webinar in order to learn more about the wide range of applications in which hybrid PV-Thermal systems can be used. This two-in-one technology offers attractive payback periods whenever a constant amount of heat is needed all year round and electricity is consumed on site. The event was part of a series of Solar Academy webinars supported by Task 60, Application of PVT collectors, and organised jointly with ISES, the International Solar Energy Society. Task 60 is one of currently nine international research platforms set up under the auspices of the IEA Solar Heating and Cooling programme (IEA SHC). A recording of the event and the presentations given at the webinar are available here. To reach a wider audience, Task 60 has also created a Wiki page on PVT.
Source: IEA SHC Task 60
“PVT lets you maximise the solar yield in relation to available roof space,” explained Jean-Christophe Hadorn, Leader of Task 60. To corroborate his statement, he pulled up a chart illustrating the output of two residential rooftop systems (see image below). On the left-hand side, the chart shows 29 m2 of thermal collectors and 13 m2 of PV modules put up side by side, whereas the 42 m2 system on the right consists of PVT collectors only. “Solar heat output will be about the same for both roofs, that is, 22 MWh. Even though the PVT system shown on the right produces only 524 kWh/m2a, it does have more absorber area,” explained Hadorn. “However, the amount of electricity generated by the 42 m2 PVT installation will be much higher than the 13 m2 PV modules of the left, because PVT shows no noticeable reduction in yield. If you add together the electric and thermal kilowatt hours in both scenarios, you can see that the PVT roof generates 13 % more energy.” 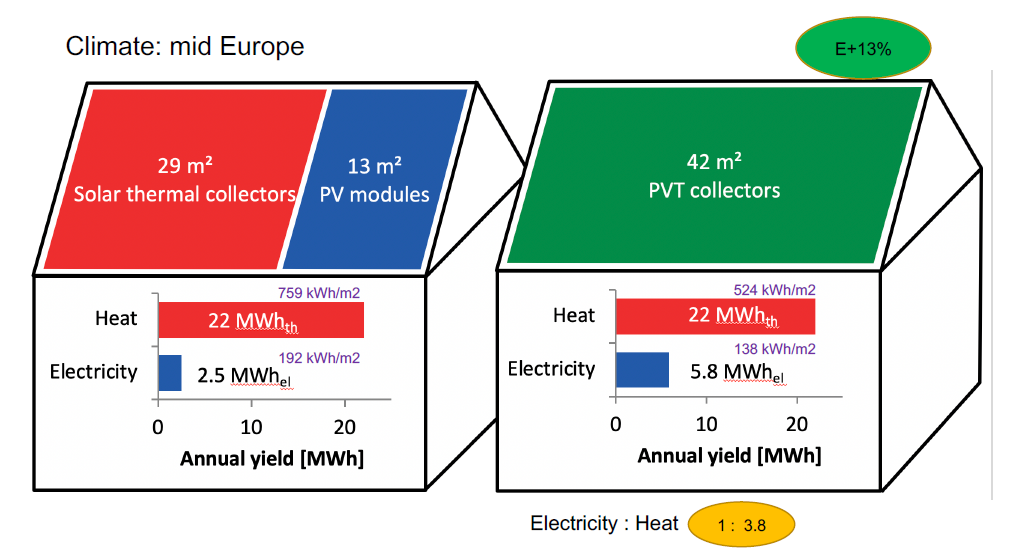 In central Europe, you can harvest 13 % more solar energy from a PVT roof than if you install heat and electricity generating systems separately.
Source: IEA SHC Task 60 and Fraunhofer ISE, Germany
PVT benchmark costs
Hadorn went on to compare the cost of modules used for side-by-side installations and hybrid solar roofs: “If you use stand-alone components, you will need to pay, on average, 250 EUR/m2 for glazed collectors in Europe and 114 EUR/m2 for PV modules. Assuming the PVT collector is as productive as a side-by-side solution, a PVT system may cost up to 364 EUR/m2 if you add up the average prices for both technologies.” He also assumed a PVT installation would be 50 EUR/m2 cheaper thanks to time and material savings and would bring in another 100 EUR/m2 annually over 25 years because of the additional electricity generated by the system (the +13 % increase mentioned above). He concluded that “if the glazed PVT collector you want to buy costs less than 514 EUR/m2, by all means, take it! You can already get a system for this price from some of the suppliers in Europe.”
Attractive payback periods in southern Europe
Hadorn said customers with little seasonality of  hot water demand, such as sport centres, hotels, hospitals and car washes, will benefit the most from PVT. During the webinar, he presented a cost assessment with regard to a 314 m2 PVT system installed on top of a 200-bedroom hotel in Barcelona, Spain (see the following table).
Cost assessment of a PVT system put up at a hotel in Barcelona, assuming a 25-year lifetime and including financial costs. The heat from the glazed PVT collectors is used directly to meet demand for hot water at the hotel without the need for a heat pump and 80 % of the PV-generated electricity is used on site as well.
Source: Task 60
“PV cooling effect is marginal”
PV cells have a negative temperature coefficient, which means their efficiency is reduced at higher operating temperatures. When PVT started to gain popularity 10 years ago, several suppliers had emphasised the cooling effect of PV cells in PVT systems. However, Hadorn told webinar attendees that this effect is only marginal: “There are a few applications where you can get a bit more out of the PV side of your PVT system thanks to a cooling effect, but this is not the main argument in favour of this technology.” The cooling effect can be observed in system configurations where PVT elements produce low-temperature heat that is later used to run a heat pump or regenerate borehole storage.
More information:
IEA SHC: www.iea-shc.org
Solar Academy: https://www.iea-shc.org/solar-academy
Task 60: http://task60.iea-shc.org/
PVT Wiki: https://en.wikipedia.org/wiki/Photovoltaic_thermal_hybrid_solar_collector
News
Domestic Hot Water and Heating
Switzerland
Spain
PV-Thermal Technology
Green Buildings
webinar
IEA SHC