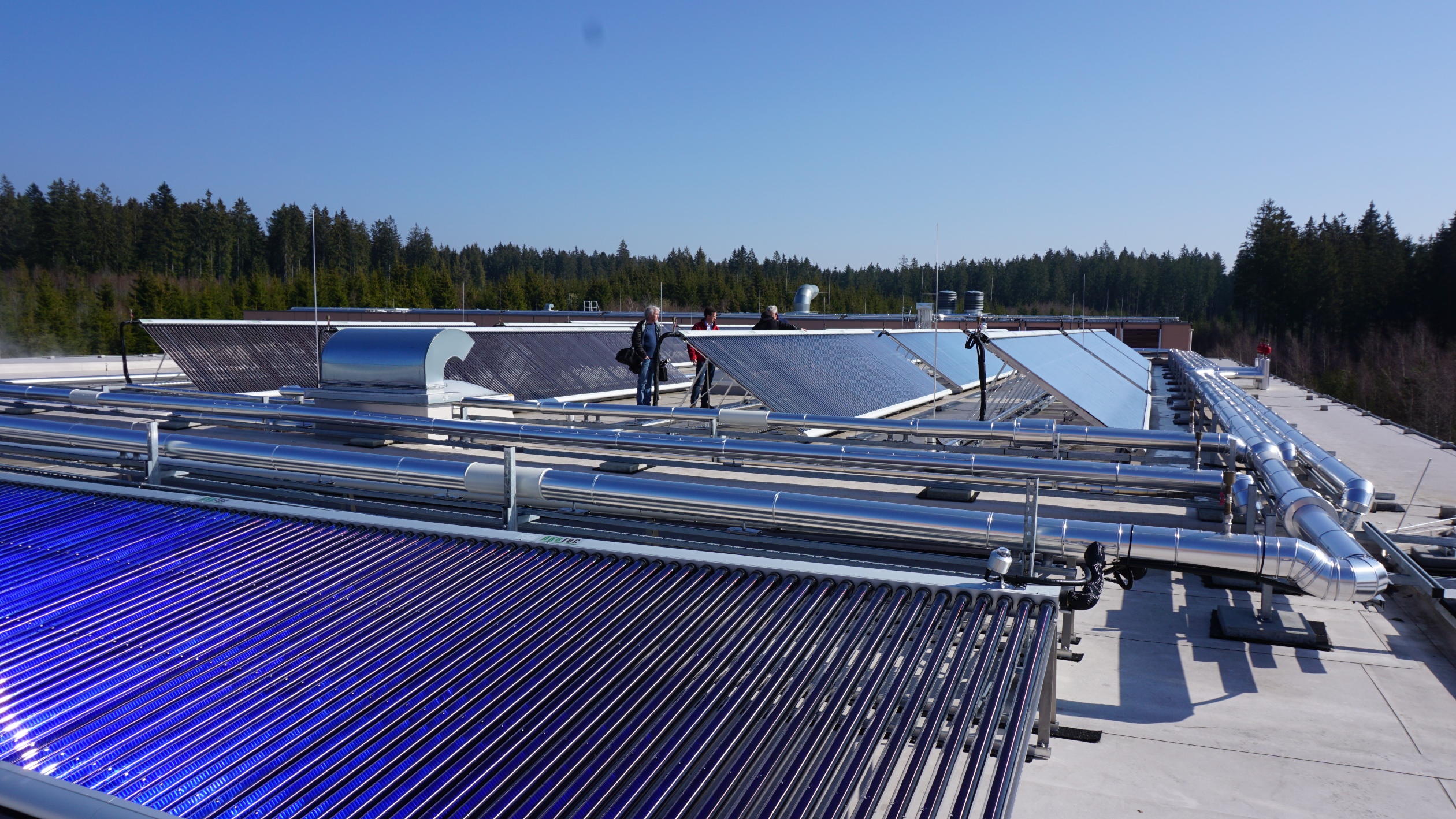 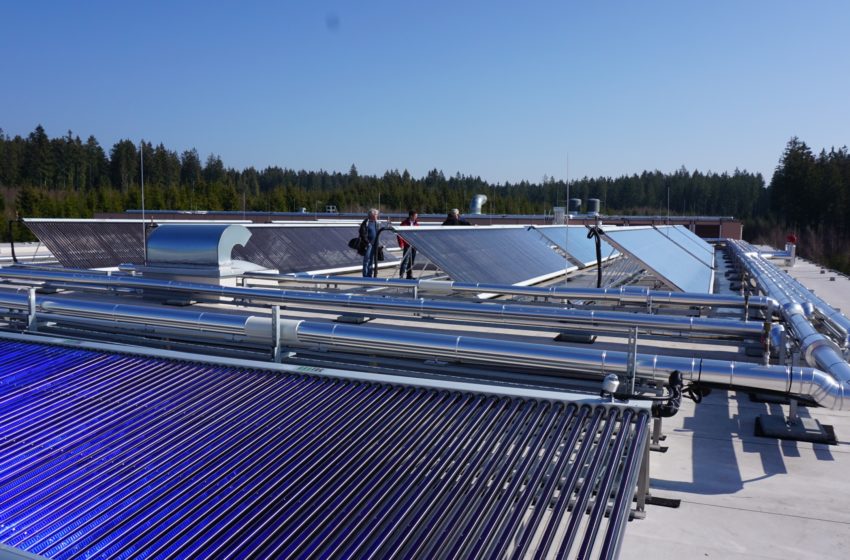 Industrial solar heat will be a key element of any strategy to decarbonise the industrial sector. A mid-November workshop organised by partners to the EU-funded INSHIP project explained how industrial solar heat options can become affordable when SHIP systems work in concert with other renewable technologies. One of the presentations at the workshop described how a new 998 m2 vacuum tube solar field installed at Rothaus, a state-owned brewery in Germany, is bringing the company closer to its goal of largely clean heat supply. And a German SHIP technology provider, Industrial Solar, showcased its design for a solar steam-producing system that combines PV panels and linear Fresnel collectors.
Photo: Rothaus
The workshop, titled SHIP – A Key to Industrial Decarbonisation, was jointly organised by Peter Nitz, of Fraunhofer ISE, Germany, and Jürgen Fluch, of AEE INTEC, Austria, in cooperation with Vikas Patil, of ETH Zurich, Switzerland. Nitz and Fluch co-chair the Guideline to Market working group that is part of IEA SHC Task 64 – Solar Process Heat. Nearly 200 industry experts registered for the event, which focused on three countries: Germany, Austria and Switzerland.
“Our idea was to present the relevant issues from the perspective of an end user and a technology supplier to determine what is missing for a broader deployment of SHIP systems,” Nitz explained in his opening speech.
The Rothaus brewery zeroed in on a renewable-only strategy in 2008, when it started up a wood chip boiler and a waste heat recovery unit for air supply. Both devices already provide 67 % of the 17,600 MWh needed for heating purposes per year. In 2016, Rothaus then signed a purchase agreement for 8,500 MWh of clean electricity to meet its power needs all year round. The new SHIP system, which was partly installed on the roof and partly on the facade in 2018, provides another 400 MWh, or 7 % of the factory’s remaining thermal energy, which was previously supplied by oil boilers.
Ralf Krieger, Rothaus’ Technical Director and Brewmaster, later underlined the importance of the German market rebate programme MAP’s 45 % grant, which helped cut the payback period to below the lifetime of the EUR 1.07 million SHIP system (see following chart).

Chart comparing the investment in a subsidised EUR 588,000 SHIP system (red line) and the cost of providing the same amount of thermal energy via oil-fuelled backup boilers. The prices for heating oil in this example range from 0.35 EUR/litre in 2002 (yellow line) and 0.9 EUR/litre in 2012 (blue) to 0.6 EUR/litre in 2017.
Source: Rothaus
PV-Fresnel system improves solar fraction
When speaking at the workshop, Christian Zahler, CEO of Industrial Solar, pointed out how important it is to combine different clean technologies, to use the limited space that is usually available as much as possible. As an example, he mentioned a study about the SHIP potential at a food producer. The company intended to lower the carbon footprint of its factory and make use of the high on-site levels of direct irradiation without changing the production process itself. “Our aim was to achieve the highest solar fraction possible across the available area,” said Zahler.
The feasibility study therefore assumed that a 950 kWp PV system would be put up on the nearby 8,000 m2 car park roof. In addition, 28,000 m2 would be set aside at ground level for the installation of an 8 MWth field of Fresnel collectors to produce 14 tonnes of steam an hour. Both systems would then feed into the client’s steam network via a steam drum designed for cost-effective daily storage.
In subsequent computer simulations, the solar electricity thus generated was used to produce steam to meet immediate demand. Alternatively, the steam was injected into the factory or public grid. This combination of PV and solar thermal collectors allowed both a high solar fraction and a high utilization of the solar thermal system in the future when the customer will have a reduced steam demand.
Payment guarantees mitigate risk for ESCOs
The discussion at the end of the workshop made it clear that first and foremost, business models will have to ease users’ financial burden. “The majority of manufacturers in Europe benefit from low-cost gas, and emissions from burning gas have not really had a price attached to them yet. Therefore, it is difficult to convince managers to agree to long-term infrastructure investments in SHIP,” Zahler said.
Winfried Braumann confirmed that “the industrial sector does not like to invest in energy production units that have long payback times and which do not seem like real assets to business, as this would not look good on balance sheets and negatively affect credit ratings.” Braumann, Managing Partner at Austrian Reenag, used the opportunity offered by the workshop to present the innovative TrustEE refinancing scheme, which offers energy service companies (ESCOs) outside sources of cash.
He added that ESCO models could only be implemented on a larger scale if public institutions offered appropriate payment guarantees. According to Braumann, these guarantees have already been used frequently in the export business and have had a large impact on growth in that area. They will now need to be adapted to accommodate SHIP projects, to mitigate the risk of a shortfall in customers’ regular payments for heat. “In short, we could use the export businesses’ approach, backed by public funding, to support climate actions,” he concluded.
Organisations mentioned in this article:
http://inship.psa.es/
https://task64.iea-shc.org/
https://www.ise.fraunhofer.de/en.html
https://www.aee-intec.at/index.php?params=&lang=en
https://ethz.ch/en.html
https://www.rothaus.de/
https://www.industrial-solar.de/