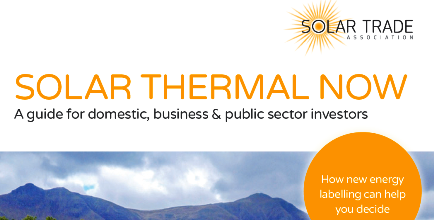 Against the low standing of solar thermal technology, the British Solar Trade Association (STA) has launched a 16-page colourful brochure. The guide called Solar Thermal Now – A guide for domestic, business & public sector investors showcases the technology’s merits, the flexibility and broad application of solar thermal, while highlighting its enormous potential for cost and carbon savings. The report is available for download attached and association members can order hard copies. The brochure reveals some of the misconceptions in the support structure for ST in UK.
The STA reports that 80% of all new boilers sold in the UK are combis i.e. combining domestic hot water and space heating from one appliance usually powered by gas but sometime with oil as the fuel. It is a common misconception that within the renewable heat incentive (dRHI) for private home owners solar thermal cannot be combined with such boilers, whereas some manufacturers have developed solutions that will allow a wider adoption of solar thermal with combi-boilers already installed.
Boiler Plus versus LabelPack A+
The STA’s photographic guide also emphasizes how the EU energy labelling can help inform and improve investment decisions for schemes up to 70kW in size.
In UK the label is promoted under the term LabelPack A+, as part of an EU project. The system integrator or installer adds the so called package label to a complete hot water system, which can be  combined from components of different manufacturers. This label will illustrate the overall efficiency of the system whether combined with solar thermal or not.
Additionally for England, new guidance for domestic heating will come into force from April 2018 called Boiler Plus (see attached document). This advice to the Building Regulations requires combination boiler replacements to include the provision of an additional energy efficiency measure to be installed at the same time, but solar thermal is not listed as one option:
According to the Clean Growth Strategy of the Department for Business, Energy & Industrial Strategy (BEIS) these additional efficiency measures for combi-boilers have to be one of the following:
BEIS aims as wants to improve the energy efficiency for the 1.2 million new boilers installed in England every year and to ensure control devices are included with every installation.
However, it is surprising that there is no mention also of solar pre-heating as a measure given the reasoning of the LabelPack A+ which already acknowledges that solar input improves the efficiency of a heating system. It is further surprising since flue-gas heat recovery systems are another form of pre-heating the cold water which competes technically with solar thermal pre-heating for DHW. The decisions by the devolved administrations of Scotland and Wales are still awaited.
The new guidance for combi-boilers is as a result of a BEIS consultation form early 2017 that included questions asking if other technologies that should be considered equally to those listed above. Despite 890 respondents, there was not any mention of solar for heating in the BEIS summary document.
In response to this Leonie Greene, Director of Advocacy & New Markets for the Solar Trade Association said: “The LabelPackA+ logo has been compulsory since 2015 and it should be used for labelling all space and water heaters.  It is very disappointing that the Government hasn’t explained this rather vital context for the boiler market. Particularly since they say that they want consumers to be well informed in order to make effective decisions on heating systems. You cannot secure an A+ efficiency class or higher on a heating system without incorporating renewables. And a failure to promote renewable heating technologies in the mainstream heating market is particularly disappointing given the UK’s very poor performance on renewable heat. We will have to decarbonise heat to meet our climate targets.”
She continued “One of the aims of the LabelPackA+ label is to develop supply chains, so the Government needs to assist this by driving up standards in what is a huge market. Solar thermal is perfectly compatible with combi boilers, which comprise the large majority of new installations now, so they should be helping to overcome barriers and misconceptions. Indeed major boiler manufacturers sell boilers that can integrate solar heated water, so you have the industry really ahead of the Government in many ways.”
Organisations and projects mentioned in the article:
http://www.solar-trade.org.uk/
http://www.label-pack-a-plus.eu/
https://solarthermalworld.org/wp-content/uploads/2018/01/solar_thermal_now_brochure_sta_uk.pdf
https://solarthermalworld.org/wp-content/uploads/2018/01/boiler_plus_final_policy_and_consultation_response.pdf