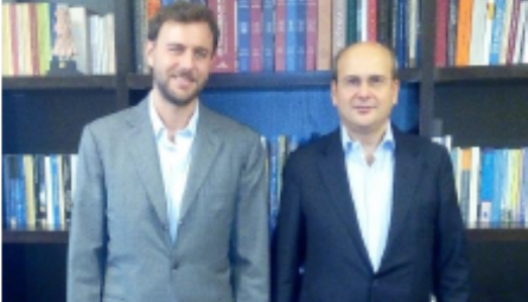 Greece’s solar water heater manufacturers have proved to be highly resilient at a time when the country is in economic crisis. The collector manufacturers were able to increase both domestic (+19 %) and export (+16 %) sales in 2014, according to the Greek Solar Industry Association, EBHE. The industry provides a high level of vertical integration and exports 50 % of its annual production volume. EBHE promotes a number of measures to keep business growing for its members. At the beginning of the year, the association and industry sponsors commissioned the Greek Foundation for Economic & Industrial Research, IOBE, to carry out a survey on the economic impact of a domestic tax reduction scheme. The survey results are now available and EBHE’s President, Panayis Konstantinidis, has already been in several meetings with ministry officials and members of parliament. The photo shows Konstantinidis (left) with Kostis Hatzidakis, Member of Parliament and former Minister of Development, during a discussion in September 2015.
Photo: EBHE
“Over the last months, we spoke with several government and parliamentary officials to emphasise the fact that a tax reduction strategy strengthening the Greek solar thermal industry would have several advantages for the national economy,” Konstantinidis explains EBHE’s strategy. “It will increase the net tax flow of the government, create jobs and help reach the green targets of climate protection.”
To add some hard evidence, EBHE commissioned IOBE to conduct the survey because the company is “a well-known consultancy that ministries also take seriously,” explains the EBHE president. The study has been available since March 2015 and analyses different scenarios with tax-related incentives promoting residential solar hot water systems:
The survey provides a detailed analysis of the economic impact of each scenario, listing eight economic parameters, such as new jobs, emissions avoided and net tax credit per MWh. The following table shows that scenario B and C create positive net flow, plus a number of new jobs. These figures are door-openers for Greek politicians.
Results of the different IOBE study scenarios. The study is not publicly available.
Source: Greek Foundation for Economic & Industrial Research (IOBE)
The big difference between scenario A and B is the number of systems sold with a receipt. In scenario B, fewer consumers will benefit from the tax credits, so tax credit costs are down significantly. But a good number of consumers will not be interested in any receipt, which means tax income will go down as well. Overall, however, scenario B comes out ahead by showing a small amount of positive net money flow for the government, whereas scenario A results in negative money flow.
Websites of the institutions mentioned in the article:
http://iobe.gr/&nbsp;
http://www.ebhe.gr/