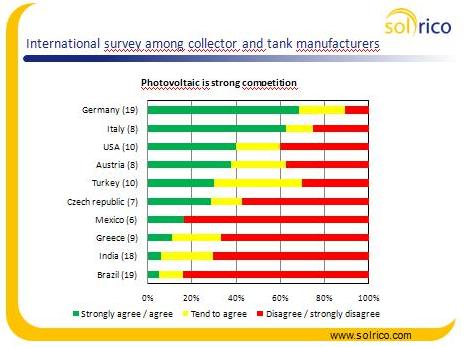 The statement "Photovoltaics is strong competition" resulted in different responses among the solar industries of different countries. Greece is one of the countries where the industry does not agree with it. Source: solrico

Two-thirds of the German and Italian collector and tank manufacturers agree with the statement "Photovoltaik is strong competition", while it is opposed in Greece, India and Brazil. The number in brackets indicates how many questionnaires were received back from that country.

Greece is said to have been one of the top markets for photovoltaic technology in Europe in recent times. Confidence in a speedy development stems, besides the sunny climate, from a new feed-in tariff: On the 4th of June 2009, the Ministry for the Environment, Physical Planning and Public Works has launched a programme outlined in law 1079/2009 for the installation of small PV systems on rooftops. The difference to feed-in tariffs that are in place in other European countries: To be eligible for it, a Greek residential has to cover part of his or her hot water demand by some other renewable source (e.g., solar thermal).

“The Greek Solar Industry Association (EBHE) squeezed this privileged regulation for solar thermal energy into the law through constant lobbying,“ Kostis Konstantinidis, Technical Director of Greek collector manufacturer Calpak, explains. The Greece solar thermal industry has a long history and many well-established brands. And, a solar hot water system pays off much faster than a PV system, even with a feed-in tariff. Therefore, manufacturers in Greece have not yet regarded photovoltaic as strong competition, which can also be seen by the answers presented in the above figure.

Two-thirds of the questioned manufacturers disagreed when being asked: “Can you personally agree with the statement that photovoltaic is strong competition in your national solar thermal sector.” The red bar in the above figure shows the number of answers with “disagree” and “strongly disagree”, whereas the green bar includes the answers “strongly agree” or “agree” and the yellow adds up the “tend to agree” answers. The figure is the result of a worldwide market survey among collector and tank manufacturers carried out by the German agency solrico. “We have not seen any PV installations in the residential sector so far,” Costas Travasaros states. The General Manager of Greek absorber manufacturer Prime Laser Technologie, however, warns against ‘a battle for the roof’, once the bureaucratic hurdles are solved.

EBHE was founded in 1979 and has 24 permanent members from the industry itself and another 27 associated ones, among them research and test institutions, as well as machinery and material suppliers.