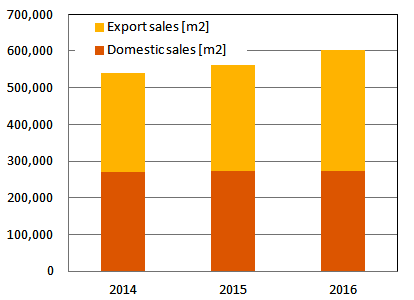 Despite shrinking markets in Europe, Greece’s collector and tank manufacturers have increased their exports two times in a row. In 2015, the solar thermal industry delivered 7 % more collector area abroad and in 2016, the figure even rose by 14 % compared to the year prior and totalled 330,000 m² (231 MWth). Main export markets were in Southern Europe, North Africa and the Gulf region. Domestic sales have remained at the same level since 2014, at around 270,000 m² (189 MWth).
Photo: EBHE
The 20 EBHE members from Greece’s solar thermal industry collected domestic and export sales figures for 2016 during their first assembly meeting of this year on 27 January 2017 (see the photo below).
The key success factors for last years’ growing exports had been competitive products and flexible manufacturers earning a reputation as reliable suppliers, said Costas Travasaros, General Manager of Greek absorber manufacturer Prime Laser Technology and EBHE’s representative at the European Solar Thermal Industry Federation. “Greek manufacturers have had long-standing expertise in solar thermal, something that is recognised by resellers worldwide,” confirmed Miriam Martinez, Export Coordinator at Sole. In the past, nearly all of Sole’s exports had been thermosiphon systems, although project business has been growing as of late.
“The financial crisis in the country has made our products even more competitive, meaning we were able to optimise our export business,” explained Georgios Xanthopoulos, Export Area Sales Manager at Calpak-Cicero Hellas. Overall, Greek manufacturers have become increasingly confident about international business, prompted by their accomplishments in the global marketplace. Travasaros said that export statistics showed a rise in the number of tanks, which confirmed that thermosiphon systems were still dominating sales to customers abroad.

EBHE’s general assembly meeting in January 2017
Photo: EBHE
EBHE was founded in 1979. Very recently, under the presidency of Panagis Konstantinidis (2015-2016), the association opened its membership ranks to manufacturers and companies from the PV industry. During the January 2017 assembly meeting, the president underlined the fact that the Greek government considered EBHE to be a key representative of the energy sector. Its formidable reputation is the result of member’s frequent participation in forums, panel discussions, conferences and several responses to requests by government agencies. During the January assembly, Efthimios Spanos, Managing Director of Cosmosolar, was elected to serve as president of the association for the next two years.
More information:
http://www.ebhe.gr/