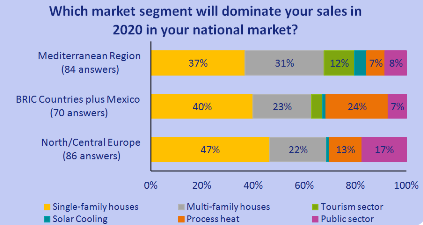 Change is coming to the world’s solar thermal markets: Single-family homes – currently the most important sales segment – are going to lose their significance in the future. Most solar thermal manufacturers across the globe predict their sales to be dominated by other segments over the coming years. These are just some of the results from international survey ISOL Navigator December 2014, a study published by German agency solrico. 365 solar collector manufacturers and solar thermal system suppliers from all corners of the globe participated in the survey. The figures in brackets show the number of questionnaires which were included in calculating the regional averages.
Figure: solrico
One in five Central European companies expect multi-family houses to be the main sales driver in five years, and one in six companies see the greatest sales opportunities with public orders by 2020. Change is even more dynamic in the selected BRIC countries and Mexico: A quarter of the manufacturers expect solar process heat to have become the dominating market segment in 2020 – a segment with a rather low deployment level today. In the Mediterranean region, multi-family buildings (31 % of the votes) are said to be almost as important in 2020 as the single-family home segment (37 %). Comparatively small is the number of companies which will place the emphasis on the tourism segment in the long run.
Renewable obligations and incentive schemes trigger the shift to the commercial segment
The transition is occurring at two different levels: First, there are markets such as China, France or Austria, on which residential sales have decreased dramatically over the last years. Most companies operating on these markets agree that the commercial segment will surpass the market share of single-family homes in 2020 (see the chart below).
Second, there are other countries whose policies such as obligations or incentive programmes trigger the shift to the commercial segment. One example is Spain, where the renewable obligation applies to all kinds of newbuilds – residential and commercial. The same is true for the Chinese market, on which activities have turned from the rural areas to municipalities with solar obligations in place. In the United States, the major incentive programmes, such as rebates in California and Massachusetts or SRECs in North Carolina, Maryland and Washington DC, apply not only to homeowners, but also to commercial customer groups. In rather traditional markets, for example, in Brazil or the Czech Republic, the majority of the local solar thermal system suppliers are convinced that the market share of single-family homes will still dominate sales in 2020.

Results of the study ISOL Navigator December 2014 in selected countries, based on 365 filled-in questionnaires from the global solar thermal industry.
Figure: solrico
solrico is a German agency specialised in market research, as well as reports on solar heating and cooling. Once a year, it carries out an international study among the solar thermal industry. This year, solrico has put the spotlight on the transition of the global market and the 2015 forecast for 18 key solar thermal markets around the world.
More information:
http://www.solrico.com