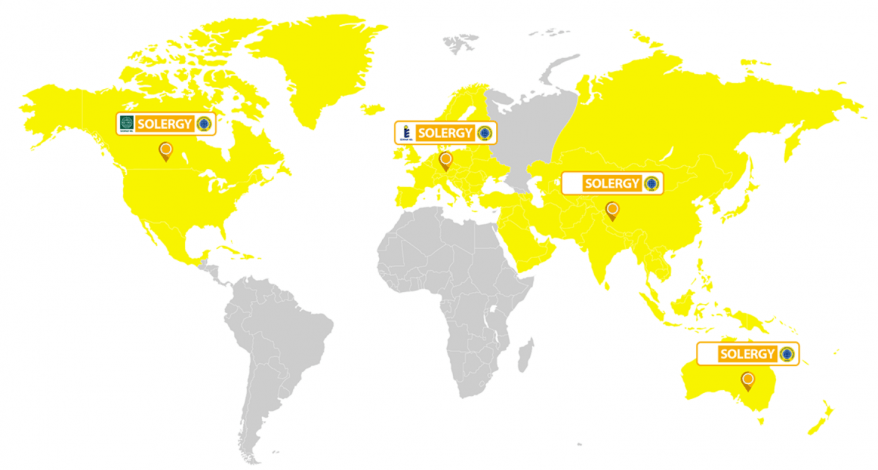 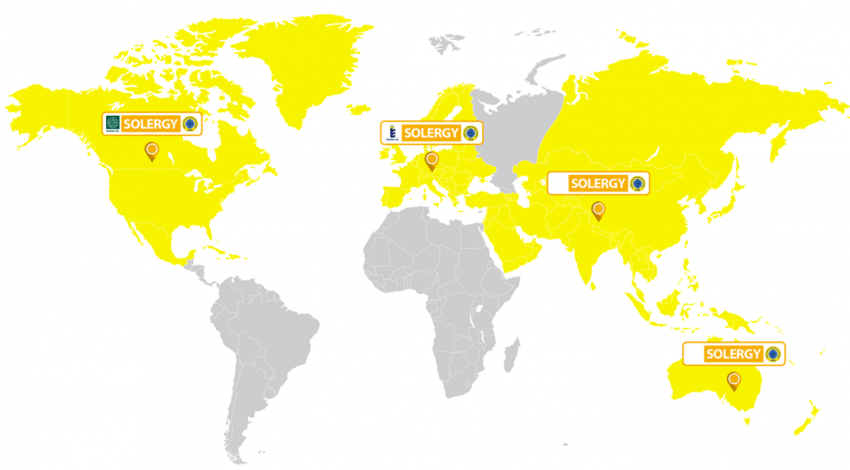 “Unite for solar heat” is the idea behind a new alliance forged between the Global Solar Certification Network and the Solar Heating Initiative. “Our plan is to develop joint marketing and communication campaigns, and the relaunch of the GSCN website will be the first output from this new alliance,” GSCN Chairman Harald Drück said at the most recent IEA Solar Heating and Cooling Programme Executive Committee meeting in November 2021. The GSCN was founded in 2016 with the support of IEA SHC Task 57 – Solar Standards and Certification. Thanks to the mutual recognition of test and inspection reports across continents, GSCN can help solar collector businesses avoid re-tests of products and re-inspections of production lines when they enter new markets.
Source: https://gscn.solar/
“Our new partnership with the GSCN will take the Solergy label scheme global so it can be implemented in other regions of the world, such as in North America, in Asia and in Oceania,” said Stefan Abrecht, the developer behind the Solergy methodology. In 2016, he and Marisol Oropeza, of consultancy matters.mx, introduced the collector label to the European market in close cooperation with German certification body DIN Certco. Since then, 25 collector manufacturers and suppliers have applied for the label. Further information on how to read the Solergy label, you can find in the infographic at the end of the article.
The GSCN is an independent network of about 30 certification or inspection bodies, test labs and manufacturers. It is chaired by Drück, who works at the German University of Stuttgart’s Building Energetics, Thermotechnology and Energy Storage Institute – IGTE, and is run by Leopoldo Micò, of Solar Heat Europe, Belgium.
The overall aim of the new alliance is to provide reliable certification schemes as well as consistent and ready-to-use marketing resources to help popularise high-quality solar thermal collectors and open up new sales opportunities for the solar thermal industry. Oropeza sees the advantage of the alliance in both “presenting a unified image” and “giving the industry a stronger voice internationally”.
Improve products and strengthen competitiveness
According to the Solar Heating Initiative (SHI), “the Solergy label aims to improve the positioning of solar thermal collectors as generators of CO2-free heat, increase transparency about their efficiency, and help consumers make better purchase decisions when it comes to environmentally friendly and sustainable, cost-effective heat.” In addition, Solergy encourages manufacturers to keep improving their products and strengthen their competitiveness. Within the scheme, each collector is assigned an energy efficiency class, which ranges from A- to AAA based on the annual output of the collector in different European climates as calculated during Solar Keymark certification. 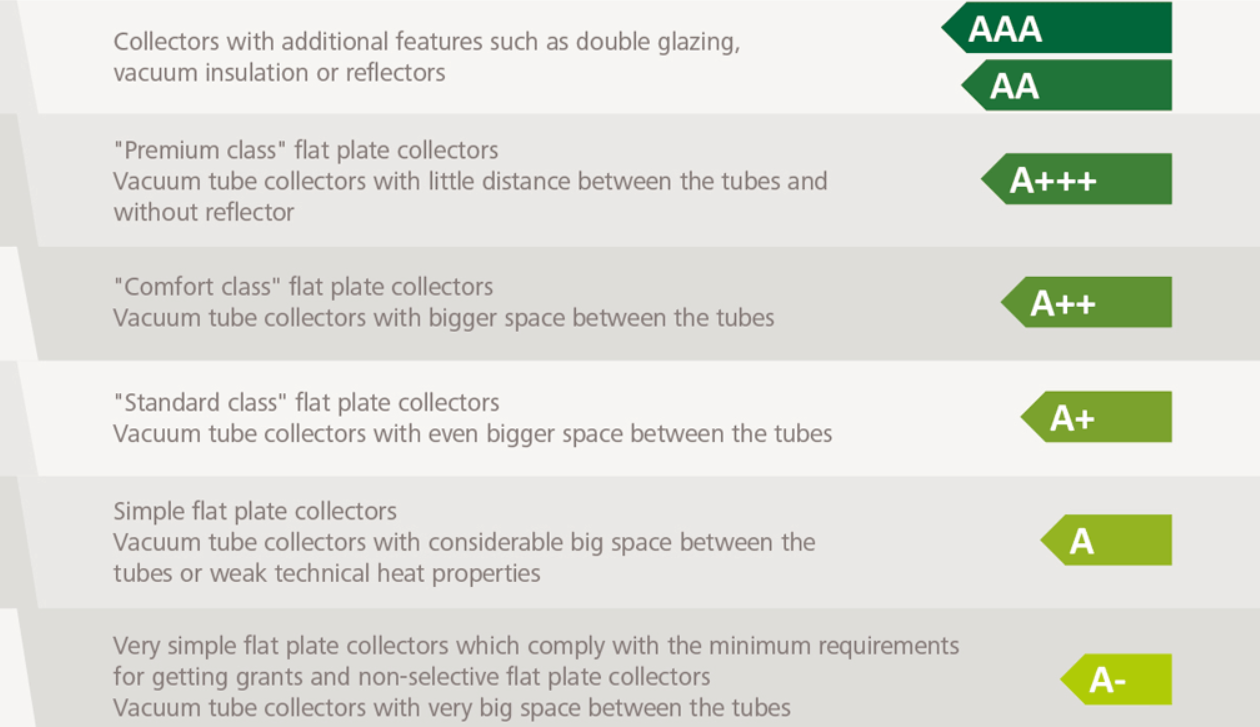 The Solergy label offers potential customers an easy way to judge the efficiency of solar collectors. The label listing refers to European climates with solar heat supply temperatures of 50 to 75 °C and will need to be adapted when applied to sunnier regions.
Source: https://gscn.solar/solergy/
To understand why the creation of an alliance between the GSCN and the SHI was long past overdue, one needs to know a bit about the history of both initiatives, which were launched independently the same year. When the Solergy label was introduced in 2016, it sparked off a heated debate during which the Solar Keymark network representatives made it clear that they were not ready to support the label at this early stage. “The initiative is predominantly limited to Germany and lacks broad industry support” was one of the reasons given. On top of this, the solar thermal industry was not entirely on board either: Some collector manufacturers feared the competition they would face from putting so much information, especially the data on yields, out in the open.
Despite these early setbacks, the Solergy label gained in importance internationally and is today found on collectors produced in Greece, Germany, Italy, the UK, Portugal, France and China. And the steady annual decline of the European solar thermal market meant that pressure was growing on the industry, associations and other facilitating organisations.
Six years later, in April 2021, the members of the GSCN then finally agreed during their annual meeting to form an alliance with the SHI. “We have recognised the potential of the Solergy label not only as a key measure to increase the value of existing certification schemes but also as a strong basis for markets where no official certification schemes are available. We are delighted to offer this new service to our members,” Drück is quoted in a joint press release published in December 2021. You can read the full text here: https://gscn.solar/solergy-goes-global-the-global-solar-certification-ne&#8230; 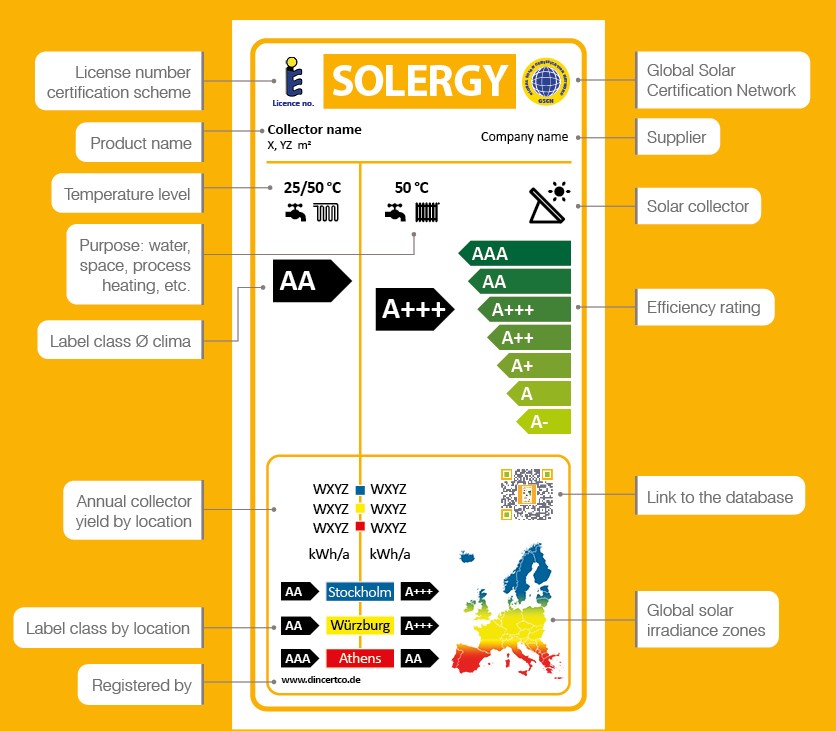