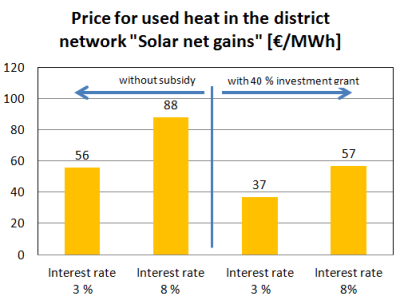 The calculation of solar heat prices very much depends on the frame conditions. The chart on the left shows heat prices for a solar district heating system, with costs differing between 37 and 88 EUR/MWh. The best-case scenario – with a 3 % low-interest loan and a 40 % investment subsidy – allows a heat price of 37 EUR/MWh, whereas the worst case without a subsidy and with an 8 % interest rate forces the heat price to levels as high as 88 EUR/MWh. The calculation, which uses the newly developed online tool by German research institute Solites, is based on a 3,000 m² collector field and a 600 m³ storage tank. The tank feeds directly into a district heating network, which covers 9 % of the annual heat demand.
Source: Solites
According to Arcon, the Danish specialist for turnkey solar district heating systems, municipalities which run and own district heating systems in Denmark profit from the 3 % low-interest rate on the investment over the system’s expected lifetime of at least 20 years. Solites, however, confirmed that an 8 % interest rate is a common figure for municipal utilities to refinance investments. The difference is enormous – a 57 % increase in the solar heat price. Only a 40 % investment subsidy could bring down the solar heat price to 57 EUR/MWh at 8 % interest.
Solites assessment of the online calculations performed for the chart above
Source: Solites
Surprisingly, the solar district heating prices calculated by Danish consultancy Planenergi are even lower than the Solites estimate of 56 EUR/MWh. Planenergi calculates a solar heat price of 46 EUR/MWh for a system of the same size (3,000 m² and 600 m³). The difference can be found in the specific net costs of the system, including the collector field, buffer tank, hydraulic piping, building, planning and location: 350 EUR/m² at Planenergi and 410 EUR/m² at Solites.
“Our costs are based on long-term experiences with existing fields,” Niels From from Planenergi, confirms. “We use a cost curve which is based on the size of the collector field, starting at 430 EUR/m² for a 1,000 m² field including a buffer tank and down to 230 EUR/m² if the field has a collector area of 10,000 m² also including a buffer tank.” The following table shows the differences between the results from Planenergi and Solites.
Different calculation results for a solar district heating plant with 3,000 m2 of collector area and a 600 m3 storage tank. The term “used solar heat” describes the solar energy fed into the district heating network after tank storage, which includes storage losses, but excludes losses across the district heating network.
Source: Planenert/Solites
The table above illustrates the differences between the results from the two engineering companies Solites and Planenergi. The biggest relative difference can be found in the Operation & Maintenance (O&M) costs, excluding electricity costs for the pumps. Niels From confirms that the low rate of 0.5 EUR/MWh is based on experiences with existing fields. Solites, on the other hand, refers to the German VDI 2067 standard. “The VDI considers 1.5 % of the first years investment costs to be O&M costs, which in this case adds up to 9 EUR/MWh, even without electricity,” Thomas Schmidt from Solites explains. “In our online tool, we have already revised this figure down to 6 EUR/MWh but we did not want to move too far away from VDI regulations.”
More information:
Planenergi: http://www.planenergi.dk
Solites: http://www.solites.de
Online calculator: http://www.sdh-online.solites.de