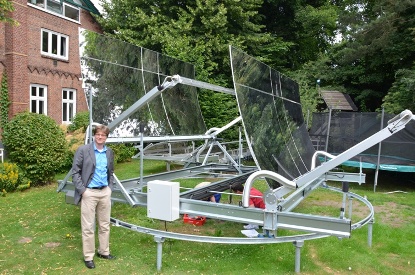 SunOyster Systems (SOS) based in Halstenbek, a town near Hamburg, Germany, has developed a new technology for the combined generation of solar heat and electricity (PVT). The first six SunOyster units are currently on their way to the Chinese town of Shuouzhou, 400 km west of Beijing. Yonghao Gangue Power Plant bought the system to feed electricity into its grid, as well as to supply heat to its district heating network. The network provides both space heating for an industrial area in winter and heat for a 10 kW adsorption chiller in summer. The photo shows company founder Carsten Corino next to the SunOyster demonstration unit at the company site in Halstenbek. The mirror on the left has been placed higher than the one on the right to minimise shading.
Photo: Eva Augsten
Each of the six delivered SunOyster PVT collectors generates an electrical output of 2.5 kW and a thermal output of 9 kW at a temperature of up to 100 °C. The SunOyster unit comprises only one side of a parabolic trough (see photo). The so-called “half-trough” opens to generate energy when the sun is shining and closes at wind speeds of 50 to 70 km/h to protect the system – hence, the name “oyster”. Like a common trough collector, the half-trough focuses the sunlight on a receiver tube. The receiver tubes contain an extruded inner aluminium tube carrying the heat transfer fluid, which is either demineralised water or glycol-based antifreeze for solar thermal applications. The PV cells are fitted to this inner tube inside the absorber tube. Each SunOyster consists of two half-trough units, which are mounted on a circular rail, so they can track the sun from east to west. An additional actuator adjusts the mirror’s inclination and closes the oysters when necessary.
According to company founder and Managing Director Corino, the idea behind the half-trough design was to avoid shade on the receiver tube, so the PV electricity generation is not influenced by partial shading from the metal bars which hold the receiver tubes at normal parabolic trough installations. The only slightly curved half-troughs also have low wind resistance and are easy to integrate into the simple two-axis merry-go-round-type tracking system. The mirror is a “sandwich” design with a thin film glass mirror produced by toughTrough from Bremen, Germany.
Next-generation SunOyster with triple-layer cells
The six collectors of the first batch have the fluid running through a rectangular tube, which is suitable for up to 6 bar, according to Corino. Together with German companies Azur Space Solar Power, Zettl Process Technology and Delta IDL and with support by the Deutsche Bundesstiftung Umwelt (DBU), SunOyster is working on a new PVT absorber tube that is said to be ready before autumn. Then, the solar thermal’s rectangular tube is to be replaced by a co-extruded plain sheet attached to a round tube, so that it can resist pressures of up to 16 bar. The PV silicon cells will be replaced by triple-layer cells from Azur Space, which will include an additional Fresnel lens with a concentration factor of 20, in order to increase the total concentration factor to 1,000. In contrast to the silicon cells which were used in the first batch and are limited to 100 °C, the triple-layer cells allow operating temperatures of up to 200 °C and result in smaller heat losses (0.1 %/K instead of 0.2 %/K). According to calculations based on 1,000 W DNI and a cell efficiency rate of 42 %, the photovoltaic capacity of one SunOyster collector will be 4.7 kW and the thermal capacity 7.5 kW.
Demonstration plants in China and India
Once the demonstration system in Shuouzhou is in operation, Yonghao Gangue Power Plant intends to add 50 more SunOyster units next to the power plant. They will be set up on the ground and be the first to include Azur Space´s next-generation cells, type 3C44, with a cell efficiency rate of 44 %. Instead of feeding their heat to the district heating network, they will pre-heat the feed water for the power plant to a temperature of 150 °C. And, seven more SunOyster systems are planned to be installed on rooftops to supply heat and electricity for domestic uses.
Regarding PV, there is a feed-in tariff of 0.95 RMB/kWh in Shanxi province. According to Corino, a feed-in tariff for CSP systems is currently under discussion. Together with Chinacoal Shanxi G-Ocean, the power plant operator has permits and plans for several hundred megawatts of solar energy, a SunOyster press release revealed in March 2014.
Another demonstration project is also planned in India, in cooperation with the Tata group. Here, 30 SunOysters are said to supply a two-phase adsorption chiller, which has 200 kW of cooling capacity and will be driven by solar heat at 170 °C. Corino sees additional potential in the thermal desalination of sea water and groundwater, as well as in the cogeneration of heat and power for industrial processes.
Corino, who used to be Head of Business Development at wind energy company Repower Systems (now Senvion), founded SunOyster in 2011, after having started to work on the idea four years earlier. In 2012, the company was capitalised with support of a strategic investor. Since early 2013, six engineers and technicians have been employed by SunOyster to develop the technology together with external partners.
More information:
http://www.sunoyster.com
http://www.deltaidl.de
http://www.toughtrough.com
zettl-munich.de/Zettl.html
http://www.azurspace.com