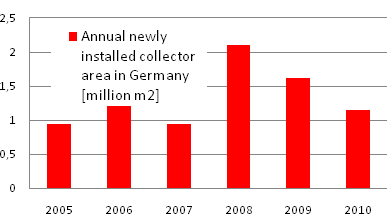 The German solar thermal market decreased by 26 % in 2010. According to the solar industry association BSW-Solar and the heating industry association BDH, 1.15 million m2 (805 MW) of new collector area were installed on German roofs last year. The market volume of 2010 is almost as low as the one in 2007, one year before the enormous boom in 2008. Compared to the market volume of that year, it equals a 22 % increase.
Photo: Source: ESTIF/BSW-Solar

The again steep decline in collector sales in 2010 has been caused by the stop of the incentive programme National Rebate Programme for Renewable Energies (MAP) between May and July 2010. The German Bundestag’s Budget Committee had halted the allocation of EUR 115 million from the MAP budget. It took the sector almost three months of hard negotiations to unblock those funds. However, despite a positive result, “you cannot make up for the losses incurred by the stop of the incentive programme during the summer months,” Helmut Jäger, Second Chairman of BSW-Solar and Managing Director of Solvis, a manufacturer and supplier of renewable heating systems, says.

The statistic of the MAP programme, released in January by the German Environment Ministry (BMU), shows the effects of the stop-and-go policy: The budget available was not used up in its entirety. Only EUR 235 million of the total annual MAP budget of EUR 291 million in 2010 were spent on approved applications – a 20 % variance.

The statistic shows another alarming sign. The number of supported renewable heating systems in 2010 almost halved. Whereas in 2009, the MAP counted 253,000 approved applications, the figure for 2010 shows only 145,742 – a decrease of 40 %, which had an enormous effect on the market.

Nevertheless, the statistic also shows that the MAP programme is successful in triggering high investments: The EUR 235 million that subsidised solar installations, biomass boilers and heat pumps in 2010, resulted in additional investments of almost EUR 1.8 billion – an excellent ratio of EUR 8 per EUR support.

The share of combi systems for hot water and space heating grew again to around two thirds, because solar water heaters in newly constructed buildings have no longer been subsidised since July 2010. The number of innovative solar water heaters between 20 and 40 m2 for multifamily houses and commercial buildings still show a disappointing small share of 1.5 % of all applications. 1,328 applications were approved in this segment in 2010.

And how is the outlook for 2011? BSW-Solar is optimistic. “In 2011, we expect a market upturn,” Carsten Körnig, Managing Director of BSW-Solar, announces. “Thus, heating costs rise sharply – the oil price has reached about USD 100 a barrel, a two-year high – and the need for refurbishing in the heating sector is high”.

But the sector still needs some extra support to get back on the growth track, which is why there are still ongoing negotiations between the associations and the ministry.

A requirement of BSW-Solar has not been taken into account by the ministry: The EUR 400 subsidy for a fossil boiler replacement phased out at the end of 2010. Now, a customer can only claim the EUR 400 when replacing a gas with a biomass boiler. BSW-Solar regrets that an important motivation factor for end consumers to tackle the problem of heating system renovation has been removed from the list of incentives. Besides that, the MAP regulations have not been changed in January (see the database of incentive programmes).