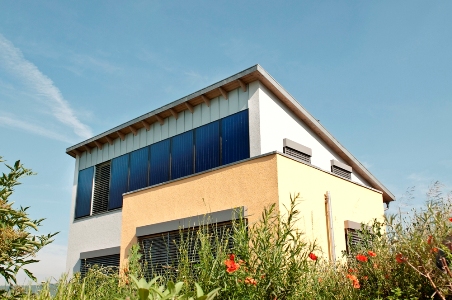 2017 was the weakest year for solar thermal collector sales in more than a decade, according to the combined statistics by associations BDH and BSW-Solar. Their data reveals that only 78,000 systems were sold last year. The newly installed collector area added up to 625,000 m², down 16 % from 2016 and as much as 72 % from the boom year of 2008. It was an astonishingly poor showing, considering the strong growth in the construction industry and the high incentive amounts available in Germany.
Photo: BSW Solar / Wagner & Co
A press release from 13 February 2018 jointly drafted by associations BSW-Solar, representing the solar industry, and BDH, speaking for the heating sector, explicitly mentioned the around EUR 3,600 that homeowners in Germany could get for a state-of-the-art solar thermal unit including a new boiler. There has been only one requirement, namely that the application must be submitted before the start of the retrofit.
Asked about the drop in sales since 2008, German-based solar thermal consultant Dietmar Lange pointed to a chart from the latest renewable energy report created by the BMWi, Germany’s economy ministry (see p. 16 of the attached document in German).

Source: BMWi
The chart displays the ratio of solar hot water systems to combi systems used for hot water and space heating. Obviously, the market decrease has been the result of a sharp decline in the sales of combi systems over the years. By contrast, the market for hot water systems remained relatively stable, even showing a slight increase in 2016. The changes to Germany’s Market Rebate Programme, or MAP, in the last years did nothing to reverse the downwards trend.
Lange said that there was a correlation between the stability of the water heating market and the introduction of the Renewable Energies Heat Act, the EEWärmeG. The act stipulates that part of the energy demand in privately and publicly owned buildings must be met by renewable sources. He added that the decline in combi systems tied in with the development of global oil prices.
He then cited another two important figures to explain last year’s weak performance. The number of residential PV generators (< 10 kWp) had increased by 32 % to 58,875 systems in 2017. The rise in sales indicated that solar collectors had often lost out to photovoltaics when competing for usable roof space.
2017 also was a record sales year for heat pumps used in space heating. The German heat pump association BWP has reported a 17 % increase, which corresponds to 78,000 units, the majority of which are said to have been air-to-water units. Heat pumps are a favourite with the European energy label for heating and hot water devices, which was introduced in September 2015. They usually achieve an A++ or A+++ rating, whereas solutions combining a solar thermal system and a gas-fired condensing boiler often do not exceed A+. Even without solar, however, these types of boilers together with a control system usually have a rating of A+ only.
Organisations mentioned in this article:
http://www.bmwi.de
http://solarheateurope.eu/
https://www.solarwirtschaft.de/en/start/english-news.html
http://www.bdh-koeln.de/en.html
https://www.waermepumpe.de/ (in German)
https://solarthermalworld.org/wp-content/uploads/2018/02/bmwi_erneuerbare_energien_2016_in_german.pdf