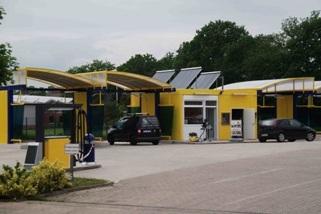 Twenty applications: That is how many subsidy requests the Federal Office of Economics and Export Control, BAFA, has received since the new incentives for solar process heat came into effect in August 2012. According to the head of the division, Ralph Baller, most of these applications have already been approved. The BAFA also received informal requests for around 50 more projects still in planning. According to the new regulations, the German Market Rebate Programme for Renewable Energies, MAP, is now granting subsidies of up to 50 % of the net investment for process heat projects with a collector area between 20 and 1,000 m² (see the database of incentive programmes. The submitted projects include several car washes as well. The one in the photo had been in operation even before the new subsidies.
Photo: Ritter XL

“We intend to use the large subsidy to overcome the obstacle of high initial investment, which has so far hindered the spread of this innovative technology,” says Baller. “The many requests and our research have shown that the improved incentives do matter.”

To evaluate the first applications in this relatively new field of solar technology, the BAFA formed a cooperation with the team of Prof Klaus Vajen from Kassel University, Germany. This group of scientists has had a lot of experience in solar process heat. Meanwhile, the BAFA has been able to build up its own expertise. It still consults the scientists, but only in difficult cases.

Kassel University has also been responsible for the evaluation of the programme. All projects above 40 m² collector area require a detailed data sheet, which has to be submitted together with the application. The information on the sheet is gathered and evaluated in Kassel. Of course, the assessment includes technical aspects, but it is thought to measure the success of the incentive programme, too.

Until now, the submitted projects have focussed on low to medium temperature heat. Among the applications and requests were:

One of the conditions for the BAFA subsidies is that the collectors must have a Solar Keymark certification. This is difficult in the case of process heat, because many medium temperature collectors are new on the market and have not yet had the chance to certify. In order to avoid project delays, the BAFA has offered applicants to approve their systems without the Solar Keymark if the application meets certain additional criteria. In any case, the Solar Keymark certification must still be submitted subsequently, together with the report on expenditure before an applicant will actually receive any subsidies.

“The solar thermal industry has a lot of hope for process heat. The subsidies present a new way of promoting commercial and industrial solar heat. This goes far beyond the promotion of space and water heating as had been the case with the Market Rebate Programme in former years. At BAFA, we call it MAP 2.0,” Baller says.