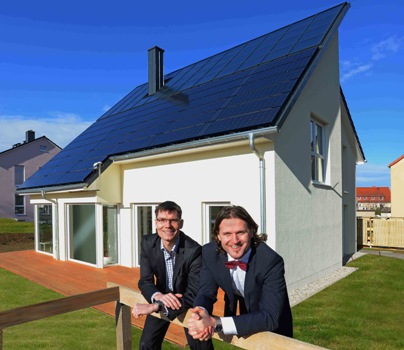 Prof Timo Leukefeld and Stephan Riedel, solar experts and members of the Solar House Institute (Sonnenhaus-Institut), have won this year’s Renewable Energy Award, or Renergy Award for short. The first award of its kind was presented at the CEB Clean Energy Building fair in Stuttgart, Germany, on 6 March 2014. It honours sector professionals for their commitment and their innovations in the field of renewable energies. The photo shows Stephan Riedel and Timo Leukefeld (right) in front of one of the experts’ self-sustainable solar houses in Freiberg, in the east of Germany.
Photo: Timo Leukefeld
According to a press release by the Solar House Institute, the two winners jointly developed and built two self-sustainable solar houses in the immediate neighbourhood, which they use as residential and office buildings. The utilisation of solar energy has made these buildings largely self-sufficient in terms of heat, power and mobility. “The main reason for the houses’ energy self-sufficiency is the construction and heating design by the Solar House Institute,” was the conclusion of the two winners. “Without any solar thermal energy, there is no energy self-sufficiency.”
“Heating and hot water accounts for around 80% of the average household energy consumption,” Leukefeld said. “Only if this large share is mainly covered by a collector system is it possible to generate the remaining energy by regenerative sources.” Equipped with collector areas of 46 m² each and long-term heat storage units, the two solar houses achieve a solar fraction of 65% – without prior conversion of the solar energy into electricity.
The above-mentioned means that the electricity consumption of these buildings is consistently low throughout the entire year. An 8 kWp photovoltaic system covers the total year-round demand of household electricity and also supplies energy to an electric car. A precisely dimensioned energy storage solution (battery) allows for more flexibility in the use of generated electricity. For example, the self-produced electricity can be used to charge the electric car in the evening.
The primary energy demand of the buildings is 7 kWh/m². This is about 90% below a single-family house according to the German Energy Saving Ordinance (EnEV 2014) and about 80% less than the standard for typical passive, positive or zero-energy houses.
Maximum independence from electricity, gas and oil
The aim of the project group of Helma Eigenheimbau, which developed the prototype of the self-sustainable house under the direction of Leukefeld, is to offer an affordable alternative for new construction projects and to use free and crisis-proof solar energy to generate heat and electricity. The residents gain maximum independence from electricity, gas and oil, as well as the related price increases.
The CEB Clean Energy Building, which takes place annually in Stuttgart, Germany, is one of the leading trade fairs and conferences for energy-efficient building, technical building equipment and renewable energy production. The organisers counted around 230 exhibitors at the fair and the conferences. Innovative fields, such as storage technologies, efficient lighting and green energy services, accompany the three core topics. CEB 2015 will take place from 7 to 9 May 2015.
More information:
http://www.sonnenhaus-institut.de
http://www.ceb-expo.de
http://www.timo-leukefeld.de
http://www.das-energieautarke-haus.de