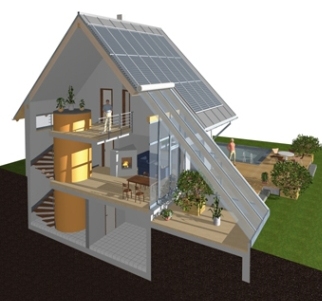 Solar thermal heating makes houses up to 67% more energy-efficient than a perfectly optimised building envelope. This is the result of a paper which compared the efficiency of solar thermal systems with building insulations. The study, which was commissioned by the German Federal Solar Industry Association (BSW Solar) and carried out by the German Sonnenhaus-Institut e.V. (Solar Houses Institute) and engineering firm Econsult, found that structures with a high solar thermal coverage are significantly more environmentally-friendly.
Photo: Sonnenhaus-Institut e.V.

Example: A so-called “Efficiency House 70” with a combined pellet and solar heating, in which the solar thermal system covers at least 60% of the space heating and hot water demand, produced only 2 kg CO2 per year and square meter. The annual CO2 emissions of a passive house with a gas boiler and a solar thermal system for water heating were three times as high, with 6 kg/m².

“Government funding achieves the best results in terms of climate protection when it is linked directly to the primary energy demand of a building,” says Jörg Mayer, Secretary General of BSW Solar. This means that the study results ought to be part of the respective legislation – for example, when adopting the EU Energy Performance of Buildings Directive (EPBD) nationally, which is currently a work-in-progress in Germany. Mayer: “Solar thermal heating designs with a high solar coverage can save much more greenhouse gases than government-funded efficiency houses. If Solar Heating XXL got the same financial support as efficiency houses, the government would meet its climate targets more easily.”

Buildings with a high solar fraction have the edge over insulation even in other areas than energy efficiency. The study has also found the structure’s additional costs to be 1.8 times lower than for a passive house with pellet and solar heating. This is due to the high cost involved in further optimising the building envelope, combined with lower primary energy savings in comparison to efficiency buildings with a high solar fraction.

Throughout the study, buildings are understood as complete systems, which consist of the building envelope and domestic engineering. To ensure the comparability of different house types, the authors use the same framework and calculation methods for each building type. This includes construction costs and energy prices, as well as energy consumption and user behaviour. “The study provides a basis for an objective discussion of innovative and energy-efficient future construction – also, against the backdrop of higher funding efficiency,” notes Peter Rubeck, the study’s co-author and Managing Director of the Sonnenhaus-Institut. “For the first time, it is now possible to compare, let’s say, “apples with oranges” when it comes to a building’s efficiency.”

The paper took a closer look at three building standards: the Efficiency House 70, the Efficiency House 55 and the passive house, which are all eligible for the funding scheme of the KfW banking group for efficiency houses. Each of these building standards has been calculated in combination with four different housing technologies: a floor heating with a gas condensing boiler and a standard solar system, a ventilation system with heat recovery, a solar system with a standard solar fraction and pellet heating, and a solar system with 60% coverage and a pellet stove.

Note: Efficiency buildings use 55 or 70% of the annual primary energy demand of a reference building pursuant to Germany’s 2009 regulation for energy savings in buildings and building systems (EnEV). Solar Heating XXL (Solar 60) stands for buildings with a solar heating system that covers at least 60% of space heating and hot water demand. Simple combined systems are primarily used to heat water and cover 10% of the space heating requirements. The combined systems with an additional gas boiler or pellet heating system are referred to in the study as “gas + solar” or “pellet+solar”, respectively.