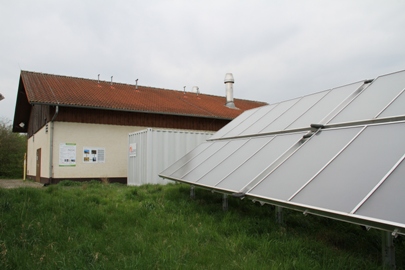 Enertracting, located in Kassel, Germany, offers solar heat as an Energy Service Company (ESCO). Its first flagship project has been a gas pressure regulating system, for which the company presented some financial and operational data at a workshop organised by the Thuringian Ministry of Economy, Employment and Technology in Erfurt in June 2014. The project, which is located in the town of Großseelheim in central Germany, has a fixed 15-year heat price of 55 EUR/MWh, which allows for a 7 % benefit for the investor (in this case, Enertracting) and a payback period of seven years. The key factors: a required temperature of between 20 and 40 °C, as well as a 30 % subsidy by the German KfW banking group.
Photo: Enertracting
Gas pressure regulating systems are part of natural gas transport and distribution systems. Whereas long-distance transportation requires high pressures, the distribution pipelines are operated at lower levels. Reducing the pressure will make the temperature drop significantly as well, which leads to air condensation and, in the worst case, even to a congelation of the pipes. To avoid such situations, gas pressure regulating systems are heated, for example, by a gas boiler, which usually consumes 0.1 to 0.2 % of the transported gas. Enertracting’s customer for the regulating system was E.ON Mitte, which became municipal energy company EAM in 2014, and is now owned by 13 municipalities and districts across the region.
15 % solar share and constant heat price over entire lifetime
Großseelheim’s regulating system requires 1.3 GWh of heat per year. This heat has been supplied by a cogeneration plant, a 355 m² field of solar flat plate collectors, and a gas fired boiler since 2012. The heat is stored in a 25 m³ buffer tank by Enertracting´s sister company, FSAVE. With an envisaged 800,000 kWh/year, most of the heat is said to be produced by the cogeneration plant, which is owned and operated by German company Biogasanlage Heinrichsthal. The solar plant is estimated to produce 190,000 kWh/year (535 kWh/m²a). The remaining annual heat demand should be met by a gas boiler unit.
In 2013, the biogas plant contributed 1 GWh from waste heat, whereas the solar yield was 143,000 kWh. The reason for the lower solar yield compared to the calculation was a higher-than-expected return temperature. Although the system is still being optimised, even suboptimal conditions result in a yield of more than 400 kWh/m²a because of the application’s low-temperature range of between 20 and 40 °C. Of course, winter is the main driver of consumption: Especially during a cold winter, consumers will need more gas, which will also increase the heat demand from the pressure regulating system. But even in summer, heat demand goes down by only 40 to 50 %.
According to Roland Heinzen from Enertracting, the heat price is the key factor in the customer’s decision: “We always point out that the heat price will remain stable throughout the plant’s lifetime.”
Another two solar plants for gas pressure regulating systems in the works
According to Enertracting, project costs added up to EUR 165,000: EUR 125,000 (352 EUR/m²) for the turnkey solar plant, plus EUR 15,000 for the buffer tank (600 EUR/m³), EUR 10,000 for the heat transfer station and EUR 15,000 for services and components not otherwise specified. Most of the amount has been covered by a EUR 118,000 KfW credit at about 3 % interest and including a 30 % repayment bonus (EUR 49,500) offered by the banking group for installations of 40 m² collector area and more. The remaining EUR 47,000 was financed through private loans.
Thanks to the subsidy and the low-temperature application, solar has become economically feasible even for gas companies, with an assumed annual price increase for natural gas of only 2 %.
Because of great economics, Enertracting is currently working on two other solar plants for gas pressure regulating systems. Regarding the second one, construction is scheduled to start in 2014, whereas the third one is going to be set up in spring 2015.
In 2013, Enertracting also installed domestic hot water systems on two blocks of 20 flats each. Both systems have 40 m² of flat plate collectors and 2,200 litres of storage volume. Solar heat at a price of 67 EUR/MWh is cheaper for the customer than district heating. The construction of a third solar plant on a multi-family building will begin soon.
More information:
Enertracting: http://www.enertracting.de
FSAVE: http://www.fsave.de