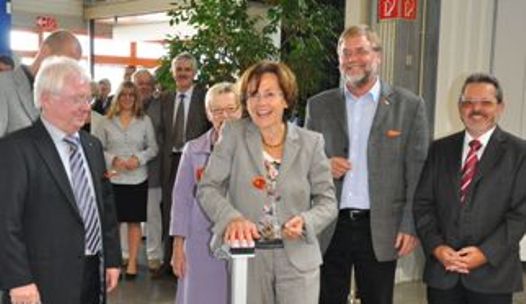 Pressing the red button: The SolarThermal Competence Centre (STCC) of German machinery supplier Minitec GmbH & Co. KG was inaugurated at the end of August by Margit Conrad, the Minister for Environment, Forest and Consumer Protection of the Federal State of Rhineland-Palatinate. The Centre demonstrates the standardized and streamlined serial production of high-quality collectors.
Photo: Minitec

New companies entering the solar thermal market will find great support in Minitec´s STCC. “We offer our clients not only the machinery equipment produced inhouse. Besides, they can also receive a collector model with an unrestricted Solar Keymark certification,” Bernd Hoffmann, Head of the Solar Division of Minitec, explains. The German company invested EUR 1 million to set up a modular, semi-automated assembly line and a laser welding machine. In October 2009, Minitec also bought the collector design schematics, machinery, material and a few collector models from the German Conergy AG, which ended its solar thermal business in 2008.

The major advantage of the new approach: First, a client saves a lot of time when developing a new collector model and going through the certification process. Second, a company benefits from years of experience in collector production and avoids running into quality problems, which are inevitable if you start from scratch. “Setting up a production line for collectors takes about six months,” says Hoffmann. “During that time, our clients can send their employees to the STCC for training and producing the first collectors under their own logo, which can be used for marketing and market introduction.”

Bernhard Bauer, Managing Director of Minitec, was pleased to announce that a South African firm had placed the first order for his company’s collector production line including the certified collector model. Minitec was founded in 1986 and employees 180 people in Germany and 70 more worldwide. Its head office achieved a turnover of EUR 34 million in 2008.
Photo: Bärbel Epp

Modularity is the key feature of the newly developed assembly line: It means that all working stations only have a few mechanical connections, so that a station can be exchanged within a day. But not just that. The control technology is also modular. “We use the Profibus and decentralized cabling, which are already standard in the automotive industry,” Andreas Poss, Product Manager Solar Technology at Minitec, pointed out. Each working station is equipped with a Profibus slave control box, which is connected to the central control unit. This makes it possible for a company, which is new to the business, to start operating a line manually with a production output of 100 collectors per day. If necessary, the facility can then be upgraded step by step to achieve an output of as much as 400 collectors per shift.

A second unique feature are the wooden workpiece carriers, which are automatically transported on the so called Flexible Montage System (FMS) integrated into the line, and are standard in Minitec machinery equipment.
Photo: Minitec

“We only recommend robots for processes for which they guarantee a higher quality output than workers doing the same job,” explains Hoffmann. The one time an automated process is used at the STCC is during the application of glue to the back wall of the collector. The Minitec collector is sealed with an EPDM gum and completed in a hydraulic press.

All machines except the last one mentioned are produced at Minitec´s headquarters just a few kilometres away from the STCC. The same is true for the laser-welding machine developed and distributed by the Swiss company Sunlaser: Since the beginning of the year, they, too, have been produced at Minitec in Germany on behalf of Sunlaser. Originally, the Swiss subsidiary of Minitec had been responsible for manufacturing the laser-welding machines.