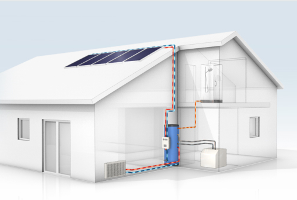 The disparity results from a much higher subsidy for solar electricity than for solar heating. Dag Wöhrmann from German collector manufacturer Schüco International KG estimated the costs of the feed-in tariff for the PV sector in Germany in 2009 at EUR 5.3 billion – paid by rate payers. In the same year, the budget for the incentive scheme for heating and cooling installations, MAP, was EUR 300 million – 18 times less.

Wöhrmann criticised that the solar heating and cooling sector was completely thwarted this year by the halt of the rebates right at the start of the solar season in April 2010, and the generally low energy prices in the country. For example, the stop of the incentives in the second half of 2006 due to a lack of funding caused a slump in the market the following year (see the following figure).

The development of the German solar thermal market: The orange parts of each column show the number of square metres of flat plate collectors installed in the respective year; the yellow parts represent the newly installed vacuum tube collector area. The last major slump in 2007 was caused by a stop of the national incentive programme in the second half of 2006 due to a lack of funding.
Figure: Viessmann

“The interruption of the MAP, together with the low oil price and the discussions about the new energy concept of the government, caused great uncertainty among customers and a reluctance to buy solar thermal systems,” Helmut Jäger emphasised in his presentation.

The CEO of German renewable heating system supplier Solvis, and member of the board of the German solar Association BSW Solar, estimates a decrease in the sold collector area in Germany by 26 %. This will further widen the gap between the solar thermal and the PV sector, with the latter being thought to almost doubled from 3.8 in 2009 to 7.4 GWp in 2010. The extremely different development does not reflect the cost effectiveness of the two technologies, which Jäger compared in his presentation (see the following table).

Disregarding incentives, the kilowatt-hour thermal from a solar heating system costs four times less than the kilowatt-hour of electricity from a photovoltaic system. “The customers are only interested in benefits and costs and not in exergy”, states Jäger the reason for comparing electrical and thermal kilowatt-hours.

Costs and cost effectiveness of photovoltaic versus solar heating and cooling.
Source: Solvis