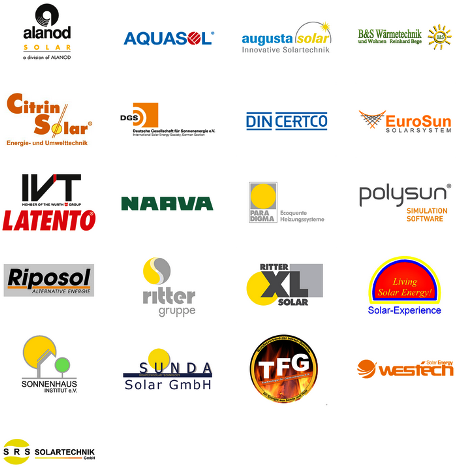 The new collector label Solergy has just been created and has already sparked a lot of debate in Germany. On the one hand, there is a growing number of collector manufacturers, associations and also the certification body DIN Certco – which are supporting the implementation of the label (see the list of logos at the beginning of November). On the other hand, there are the European bodies relevant to the solar thermal sector, such as the European Solar Thermal Industry Federation (ESTIF) and the Solar Keymark Network (SKN), which are not in favour of Solergy, although they do fancy the idea behind such a collector energy output label. To understand the reasons for the controversy, one has to look at the evolution of the label.
Source: solar-heating-initiative.com
Solergy was developed in 2014 by Stefan Abrecht, General Manager of German company Solar Experience. The reason behind it: The European energy label for heating and hot water systems, which has been mandatory since September 2015, does not give solar thermal technology the prominence it deserves. “According to EU directives, solar collectors are not heating devices, but can only improve the efficiency of conventional boilers in hybrid solutions,” Abrecht criticises EU legislation in an interview on the ecoquent website. The collector label will again increase customer awareness of solar collectors as the one and only renewable heating technology with the greatest potential, Abrecht is quoted. It will also help to increase transparency regarding the collector performance of different models.
Collector label based on Solar Keymark certificate
Solergy is based on the second sheet of Solar Keymark certificates, which was introduced by SKN at the beginning of 2012, but has not been that visible to consumers up to now. This sheet includes the annual collector unit output at different solar radiation sites in Europe (Stockholm, Davos, Würzburg and Athens) and for various average collector temperatures of 25, 50 and 75 °C. Based on the collector energy output stated on this certification sheet, Abrecht developed efficiency categories, as well as a design for the label which refers to the energy label stipulated by the European Commission.

Design of Solergy label created by Stefan Abrecht. The managing director of the German company Solar Experience, gives all interested companies the free-of charge usage rights.
European sector bodies call for broad industry support
The Solergy collector label was discussed at the Solar Keymark Network meeting in Paris, France, in October and the participating certification experts issued the following joint statement: “The Solar Keymark Network supports the idea of a harmonised voluntary energy label for solar collectors and solar thermal only systems. One requirement for this label will be that the data used for the labelling is based on the Solar Keymark data sheets listed in the Solar Keymark database.” To understand the diplomatic response, it needs a more straightforward answer by SKN’s Chairman, Harald Drück: “We do not directly support the Solergy label, because the initiative is predominantly limited to Germany and lacks broad industry support.” The SKN includes instead the further elaboration of a solar collector energy output label with regard to technical and legal issues as one of the topics for the next call of the Solar Certification Fund that will be published by the end of November 2015.
ESTIF’s board came to the same conclusion, saying that the “development of a collector label is an interesting prospect for the marketing of solar thermal collectors” and that the board “supports this idea to be further developed”. Although “understanding the urgency that some stakeholders give to the matter, the ESTIF Board stresses that this should be a joint industry initiative, resulting from broad consensus across the sector.”
DIN Certco Registration of Solergy labels could start at the beginning of 2016

As the creator and initiator of the collector label and the related calculation methodology, Abrecht gives all interested companies free-of-charge usage rights to it. A group of supportive businesses – among them in the first row of advocates, Ritter Umwelt- and Energietechnik – already followed through with label implementation, knowing that there is no time to wait for the European bodies to act. They formed the initiative Sonnenheizung (Initiative Solar Heating), brought together manufacturers and associations in support of the label developed by Abrecht and published them on a newly created website: http://solar-heating-initiative.com/. “We launched Solergy in September, at the same time when the EU labelling for heaters came into force,” explains Abrecht. “Hence, solar manufacturers have the possibility to show the performance of their collectors like conventional boiler manufacturers can.”

DIN Certco, the German certification body which is also responsible for issuing Solar Keymark certificates, is one of the label’s supporters. “We plan to start issuing and registering Solergy labels in January 2016, assuming general approval by the European Commission,” announces Achim Sadenwater, Product Manager Solar at DIN Certco in Berlin. An official request by Initiative Sonnenheizung was sent to the commission at the end of October, asking for approval of Solergy so as to ensure it does not oppose official EU energy labelling. “We plan to offer collector manufacturers the issue of voluntary collector labels for a certain fee and will publish a register of already issued labels online,” Sadenwater explains the support given to the initiative. But, obviously, this was again too slow for the label’s supporters: For example, Ritter has already delivered collectors with the Solergy label to some of its customers. Abrecht reports that there have been eight companies applying for the label so far and according to his information, German collector manufacturer Westech and Austrian solar thermal system supplier Riposol have already introduced the label to the market as well.
More information:
Initiative Solar Heating: http://solar-heating-initiative.com/
http://www.ritter-xl-solar.de
http://www.estif.org
http://www.solarkeymark.org
http://www.ecoquent-positions.com/