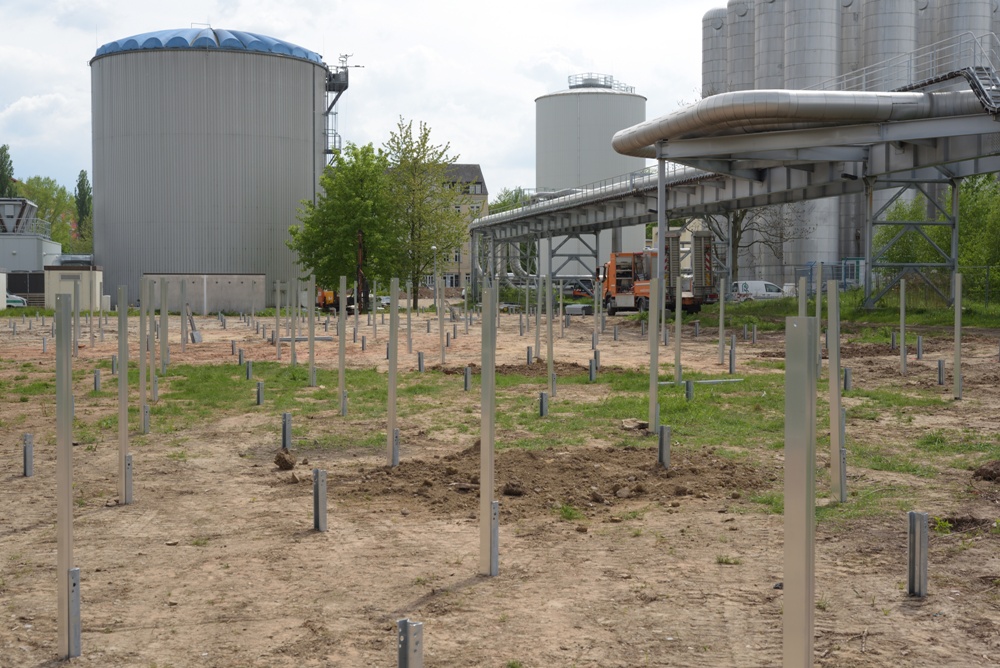 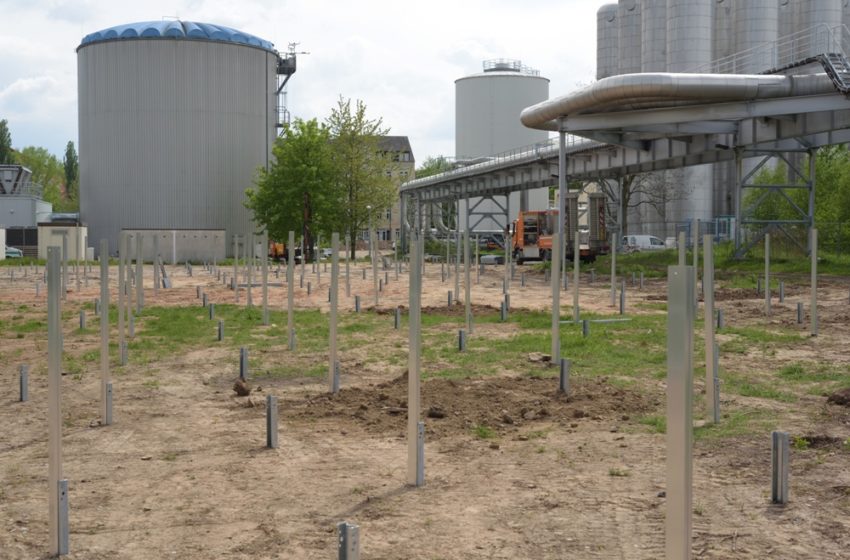 On 11 May, construction work started on a new 2,230 m2 ground-mounted collector array (2,090 m2 of aperture area) in the city of Chemnitz. The project is said to be completed within about a month, and the plant is scheduled to come into operation a few weeks later. The collector field is expected to supply almost 5 % of the heat provided by the new district heating grid for the Brühl housing development near the city centre.
Photo: inetz
Like many cities in the east of Germany, Chemnitz has been losing population over the past decades. Brühl in particular has suffered from up to 50 % vacancy. Now, it seems as if the city is slowly beginning to grow again. The municipality has made efforts to turn the housing development near the city centre into a more attractive place to live. The new heat network is part of that strategy. Its construction began in 2013.
Most of the pipe work has already been completed. Although there is no mandatory regulation requiring building owners to provide a connection to the new heat network, 60 % of them have already signed contracts with the local utility and district heating company eins energie in sachsen. “We convinced customers by touting the prospect of a sustainable heat source and competitive pricing compared to the total cost of a decentralised heating system,” said Ulf Uhlig, head of grid operations and authorised representative of eins subsidiary inetz, which manages the networks.
A smart grid of district heating
The Brühl network has been designed to supply heat to 250 buildings with a yearly heat demand of 17 to 18 GWh and a total connected load of 15 MW. Eins has configured the entire system to operate efficiently in concert with the solar field. Temperatures in the network are 75 °C in the feed line and 45 °C in the return line. The buildings’ heat transfer stations have been adapted to those temperatures and will be operated by inetz, which will stay in full control of all parameters. Together with the Chemnitz University of Technology, eins is planning to monitor the district heating grid. “This is a smart heat grid,” Uhlig said. Thorsten Urbaneck, private lecturer at the Chemnitz University of Technology, was the one responsible for designing the heat transfer stations and the system. According to his TRNSYS simulations, the solar share will be 11 % during the first phase. With more houses connected to the network, the share will drop. “This is one step toward abandoning fossil-fuel sources for heating,” Uhlig said. The remaining heat is generated in a lignite-fired co-generation plant.
Solar collector field but no heat exchanger
The principal contractor for the 2,230 m2 solar field is German Wagner Solar. The array is a combination of large-size collectors of 13.2 and 7.9 m2. The collectors, a special development for large installations, have internal manifolds. They were certified and delivered as type WRG80 and WGK133 by Wagner Solar and produced by Austrian manufacturer Greenonetec. The system’s heat transfer fluid is pure water. The water running through the collector rows will be the same as the one flowing through the storage tank and the entire district heating grid. “This presents several advantages for solar field design,” Ralf Orths from Wagner Solar explained. “It enables us to transfer heat to the grid at temperatures of 5 to 6 K above heat-exchanger versions. It increases the efficiency of the solar field, because pure water is a better heat transfer fluid than antifreeze. And, of course, it saves the costs for a heat transfer station with pumps, an expansion vessel and a heat exchanger.”
During periods of frost, the plant will be protected by return water from the district heating grid at 15 °C. This water has so far served no other purpose. “The simpler and cheaper connection to the heat network could be a model for small local solar installations in urban areas,” Orths said. The stratification tank with a volume of 1,000 m3 serves as short-term storage. The upper zone of the non-pressurised tank can store water at up to 108 °C.
The entire system cost about EUR 10 million, with EUR 1.7 million coming from a fund by the city of Chemnitz, the state of Saxony and the federal government of Germany. Inetz doesn’t put a figure on the heat prices, but points out that they will be competitive thanks to the low-temperature design, the direct connection to the network and the grants offered for the system.
Websites of companies mentioned in the article:
Utility eins (in German): http://www.eins.de
Grid company inetz (in German): http://www.inetz.de
General contractor of solar field Wagner Solar http://www.wagner-solar.com/en/
Collector manufacturer Greenonetec: http://www.greenonetec.com/
Thorsten Urbaneck: https://www-user.tu-chemnitz.de/~tur/