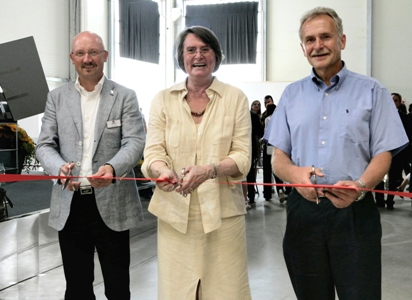 Alanod-Solar, a German manufacturer of selective absorber material, celebrated the opening of a completely new coil-to-coil lacquering line at its headquarters in Ennepetal, Germany, at the beginning of July. All in all, the company invested EUR 20 million into the new building and its 40 m long production line.

This investment opened up a new technology. So far, Alanod-Solar had been specializing in vacuum coating systems (PVD) for selective absorbers or highly reflective coatings, offering sputtered absorber material to the solar heating and cooling sector, as well as highly reflective aluminium material to manufacturers of concentrating solar power plants. Because the mirrors are placed outside a building, they require a transparent lacquer to protect them against corrosion. Up to now, such a production step had involved work sub-contracted to a third company. “With the new coil-to-coil line, we can now offer reflective surfaces that are weatherproof and produced completely in-house,” Wolfgang Peters, Desk Sales Manager, explains. The machinery has an annual capacity of more than 3 million m2.

Black-lacquered absorber coil presented at the Intersolar in Munich, Germany, in June 2010: What is called a “world innovation” is the selective coating with a 90 % absorption and 20 % thermal emission rate if combined with applying the lacquer in a coil-to-coil process at a constant thickness on a maximum width of 1,250 mm. Photo: Bärbel Epp

Another application area for of the new lacquering line aims at the world’s flat-plate collector industry. Alanod-Solar now offers materials made of aluminium, which also possess the selective lacquer, as was first presented by the company at the Intersolar in Munich in June (see photo above). “According to our knowledge, it is the first time worldwide that selective black lacquer is applied in a coil-to-coil process to aluminium coils being 1,250 mm wide,” stresses Peters.

Indeed, it is most common in the international collector industry to apply selective paint only to absorber fins – either by manual spraying or rolling. Maintaining a constant thickness during the painting process, however, is often found hard to achieve, although it is essential for the performance of the finished product. Alanod’s new technological breakthrough achieves just that. “We control the thickness of the lacquer in a range of microns,” explains Peters. Of course, such a level of quality level has its price: Mirosol TS is only 10 % more cost-effective than an aluminium sheet with a sputtered surface. The question now to be asked is whether this cost reduction is enough to compete on the world markets with selective painted absorber sheets produced in small workshops.