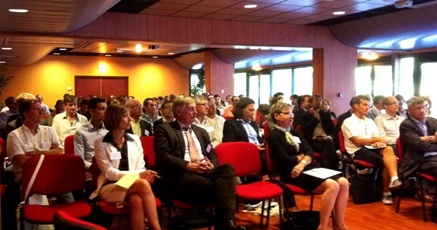 The solar thermal industry in France is going through difficult times: In 2014, market volume decreased again, this time by around 15 %, and business satisfaction among solar thermal system suppliers has been low. Both results are outcomes of the second one-day workshop held in Aix-les-Bains, a city in Savoie, south of Geneva, on 16 September 2014. Around 130 experts from the industry, research and service providers followed the invitation of Enerplan, the Union of Professionals in Solar Energy, to discuss the “Current State of Solar Heat in France”. Two of the meeting’s hot topics were innovation and reductions in system costs. As every cloud has a silver lining, there are two policy improvements this year: The tax credit for energy efficiency measures and renewable heating systems in residential homes will remain at 30 % until 31 December 2015 and the budget of the national subsidy scheme Fonds Chaleur (Heat Fund) will double from EUR 220 million in 2014 to EUR 400 million in 2017 and benefit multi-family and tertiary buildings. On the other hand, the government extended the 7 kWh/m2 bonus for multi-family houses within building standard RT1012 until 2018. The industry hoped that the bonus found in the RT 2012 building regulations would be rescinded at the end of 2014.
Photo: Enerplan
In September 2014, the tax credit for sustainable development, CIDD, became the tax credit for energy transition, CITE, offering a 30 % tax relief for energy efficiency measures carried out between 1 September 2014 and 31 December 2015. That’s good news for the solar thermal sector, especially considering the discussion at the end of 2013 to use the Finance Bill 2014 to reduce the tax credits from 30 % to 15 %. “The new CITE tax credit applies to the same energy-saving measures which used to be eligible for CIDD, for example, solar hot water and condensing boilers. It only removes the necessity to realise a bundle of measures; you can now purchase a solar water heater or a charging device for an electric car individually,” Enerplan explained when asked by solarthermalworld.org about it.
Several industry players, however, are not at all optimistic whenever the residential solar thermal market is concerned. Their main arguments: high system prices compared to other sustainable solutions, such as heat pumps, and the still declining construction sector. The following chart shows the constant downward trend of the Forecast ISOL Business Index (yellow line), which was developed by German agency solrico, since December 2011.

The graphic shows the long-term trend of the ISOL Current Business Index (green line) and the Forecast Business Index. The ISOL Index is a point-based indicator ranging from 0 to 100 points and showing the satisfaction of solar thermal manufacturers and system suppliers with current and expected market development.
Source: solrico
Stagnating as best in 2015
Solar thermal system suppliers would keep the focus on large commercial projects, several companies confirmed in the ISOL Index survey. Some hoped that the bonus found in the RT 2012 building regulations would be rescinded at the end of 2014. New multi-family houses should have reached 50 kWh/m² and year instead of 57 kWh/m² per year, which would have facilitated the installation of solar water heating systems. But on 19 December, the French housing ministry published the regulation ETLL1427096A in which the 7.5 kWh/m²a bonus is extended until 2018 (see link below).
All in all, expectations for 2015 are low. Six of ten statements about 2015 market development from the above-mentioned survey predict a shrinking market. “Stagnating at best,” one of the three companies which expect a stable market compared to 2014 stated. Only two firms expect an increase, and one of them stresses “that only a few select market players will profit from it.”
More information:
Tax credits
http://www.enerplan.asso.fr
http://www.solrico.com
Regulation de 19 Decembre 2014