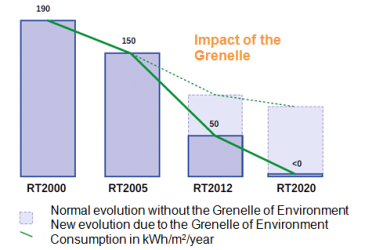 The solar thermal industry in France looks with mixed feelings to next year. Certain system suppliers are convinced that the French building regulation RT2012 will push solar water heaters in the residential segment in 2013. In contrast, others are afraid that hot water heat pumps will make the race because electricity prices are still low and the heat pump lobby is well represented across the country. Together with the low-energy building label BBC, the previous RT2005 regulation have proven to be rather successful in the last three years and especially in 2012 with regard to solar thermal systems in multi-family houses. It is still unclear how the new regulation RT2012 will affect the implementation of this technology. The chart shows the steps that have been taken to ensure a zero-energy or energy-positive housing standard in new buildings in 2020.
Chart: homeenergypros.lbl.gov

What legal developments could have produced such a difference in opinion? Since October 2011, the Réglementation Thermique 2012 (RT 2012) has made it a requirement for all new non-residential buildings to adhere to a minimum energy consumption level of, on average, 50 kWh/m2 (primary energy) per year, including demand from space heating and cooling, ventilation, hot water and lighting. The Grenelle Environment Forum, which has led to the establishment of expert committees responsible for setting up and implementing the regulations, has specified levels ranging from 40 to 65 kWh/m2, which depend on the location and altitude of the newly planned building. During the first phase, the requirements will apply to all new office buildings and educational facilities in urban areas which require important short-term renovation, the so-called ANRU zones (Agence Nationale pour la Rénovation Urbaine). From January 2013 on, the RT2012 will also cover all buildings (particularly single- and multi-family houses) everywhere in France except for overseas territories (for more information please see the attached document in French). These territories have their own standard, the RTAA DOM (see attached document from September 2009 in French).

“The previous building regulation (RT2005) made it more or less compulsory to install a collective solar thermal system with a certain high-level energy-saving building standard on new buildings. The standard here was BBC (Bâtiment Basse Consommation),” Daniel Mugnier, Project Engineer from French solar office Tecsol, explains. The current market statistics, which were published by Uniclima, the French union for the heating, cooling and ventilation industry, in October 2012, clearly depict the consequences of this obligation: The sector of solar hot water for multi-family houses (“ESC collective” in French) shows an increase of 20 % compared to 2011 (for the second year in a row) and, for the first time, equals the market volume of the residential segment.

The statements from certain experts that the new standard for energy-efficient buildings will increase the cost of housing construction by up to 20% has probably made the government scale down the energy requirements in the multi-family housing segment. The Housing Ministry has announced a bonus of 7.5 kWh/m2 and year (primary energy) from January 2013 to December 2014, so that the required average minimum energy standard of the buildings is up to 57.5 kWh/m2a. The ministry justifies this step by saying that it will allow the construction industry to develop and provide new and cost-effective energy-saving construction materials in greater volumes. This bonus, however, will make it less likely for solar water heater systems to be installed in order to fulfil the standards, because highly efficient ventilation systems, heat pumps and better insulation can fulfil the minimum energy requirements in the same way.

The building code RT2012 is technology-neutral: The technologies that will be able to fulfil the requirements are quite different in nature, among them solar water heaters, photovoltaic generators, wood boilers, heat pumps, connections to the district heating network and, alternatively, a micro-cogeneration plant. Mugnier believes that in most cases, a “rather typical small solar hot water system with 2 m2 and a 200 litre storage tank, combined with a condensing gas boiler, should fulfil the minimum requirements as a cheap solution, that could then be called ‘CESI optimised’ in France”.

Heat pumps especially for domestic hot water may also be a popular choice, as it was the case with a similar technology-neutral building code in Germany, the EEWärmeG. Every third new German house has now a heat pump installed in response to the law’s requirements.

The crucial factor to evaluate the influence of the RT2012 on the solar thermal market will be the development of the French building sector in 2013. Cécile Duflot, the French Minister of Territorial Equality and Housing of the new government, already announced in summer 2012 that it was the government’s aim to reach a yearly construction of 500,000 new houses and flats. The consultancy Germany Trade and Invest (GTAI), on the other hand, expects rather around 300,000 new residential units in 2013. In the very strong year of 2011, as many as 534,804 residential units were newly built in France.