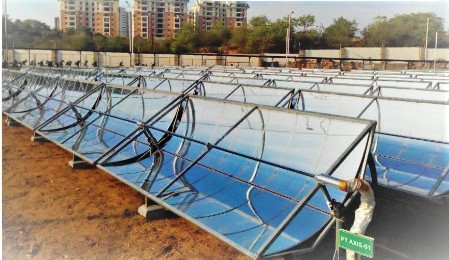 The “order” published by the Indian Ministry of New and Renewable Energy on 26 February 2018 put an end to the uncertainty which had pervaded the industry. In the 2-page document, the ministry pledged to continue its investment subsidy programme for concentrating solar thermal systems. The target until March 2020 is 90,000 m² of collector area. The financial year 2017 to 2018, during which 20,000 m² were planned to be subsidised, is almost over.
Photo: Honeywell
The subsidy is available for a variety of concentrating solar thermal applications, such as community cooking, solar process heat and solar cooling. In financial year 2018 to 2019, the subsidy amount will remain at 30 % of the benchmark or actual investment cost, whichever is lower. In the last year of the programme, it will be reduced to 20 %. In special category states (see item 5.3 on p. 10), project developers will receive 60 % or 40 % of the capital costs, respectively.
“We welcome the continuation of the policy,” said Prakash Bhalekar, Director at Quadsun Solar, a collector manufacturer and system supplier. “However, the announced reduction in support for financial year 2019 to 2020 will be a challenge. The industry will have to develop commercial systems because the funding may eventually run out.”
The Ministry of New and Renewable Energy, or MNRE for short, has set aside a total of Indian Rupee (INR) 70 million, or around EUR 0.87 million, for the programme. Applications must be submitted via the country’s State Nodal Agencies, although MNRE Channel Partners can apply for it directly.
Subsidy targets for concentrating solar thermal area between 2017 and 2020
Source: MNRE, see the attached document
The benchmark costs of various collectors will remain at previous levels. The only exception is the Scheffler dish, for which the subsidy was reduced by about 17 %.
Benchmark cost for each collector type
Source: MNRE
The National Solar Mission launched in 2010 set a target of 20 million m² of collector area. However, its announcement did not include a specific figure for concentrating solar thermal systems. Under the UNDP-GEF programme from 2012 to 2017, around 45,500 m² had been installed across the country for solar process heat, solar cooling and community cooking. Data collected by the MNRE shows the approval of only 9 concentrating solar thermal systems at a combined 5,450 m² of collector area in 2017. Pending projects will now be approved based on the new budget.
Organisations mentioned in this article:
http://quadsunsolar.com/
http://www.mnre.gov.in/
http://www.cshindia.in
CST-Scheme-2017-2020