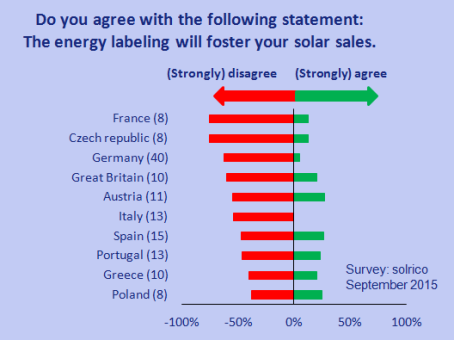 There is great scepticism among Europe’s solar thermal collector manufacturers about whether or not the energy labelling will increase demand for solar thermal systems. In a survey carried out by German agency solrico, more than 50 % of the European solar thermal manufacturers disagreed with the statement “The energy labelling will foster your solar sales”. All in all, 158 solar collector and solar tank manufacturers in Europe answered the multiple-choice question (Do you agree with the following statement – The energy labelling will foster your solar sales?) by ticking one of five answers: strongly agree, agree, tend to agree, disagree and strongly disagree. The chart shows the results at national level. The figures in brackets display the number of valid answers from each country.

Especially the German industry, the largest one in Europe, is filled with doubt. Only two out of 40 manufacturers were convinced that the label would increase their sales, one-third tended to agree and 63 % disagreed with the statement. The same kind of doubts prevail in Italy, where no company believes that the label will increase demand for solar thermal and 54 % do not expect any positive effect.
The survey had been carried out in the weeks before 26 September 2015, the day when the European energy label for space heating systems and hot water devices became mandatory. Since then, all manufacturers have had to put a label on their products and system kits, and dealers, as well as installers, have had to calculate a package label for systems consisting of components from different manufacturers.
In the past, the debate often revolved around the advantages of boiler manufacturers, which would be able to offer already labelled heating and hot water systems, whereas solar thermal specialists depended on the active involvement of dealers or installers to calculate a package label. In this context, it has been an interesting experience to compare the survey answers by companies from the heating industry with the answers by solar thermal specialists. The following table shows the results for different company types.
Share of answers to the question Do you agree with the following statement – The energy labelling will foster your solar sales? based on different groups of European solar thermal system suppliers, which replied to a survey carried out in September 2015
Source: solrico
Indeed, solar thermal manufacturers from the boiler industry have a slightly more positive opinion about the impact of the energy label on solar sales, although the difference is not that significant: 19 % are convinced that the energy label will increase demand compared to 14 % among non-boiler manufacturers. One can also observe a difference between a slightly more optimistic industry based in northern Mediterranean countries, such as Italy, France, Spain or Greece, and manufactures from northern and central Europe. Among the latter, the majority (60 %) does not expect the energy labelling to create a positive impact on the market.
How can an industry sufficiently promote an energy label it does not view as advantageous? It is a pivotal question that needs answering, as communication with the end consumer is essential for the label’s success. Take, for example, the assessment of labels for heat pumps, which have two classifications. Heat pump efficiency very much depends on the required flow temperature, which means that their label can show up at two positions on the scale based on its use for domestic hot water (55 °C) or underfloor heating (35 °C).
The complete study ISOL Navigator based on the September survey will be available in December 2015.
More information:
http://www.solrico.com