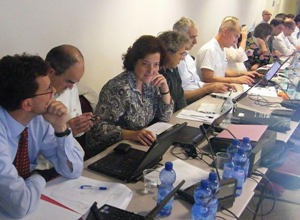 A second topic discussed at the autumn meeting was how to implement one common European calculation method for the energy output of solar collectors. Many national incentive programmes require energy output calculations. For example, applying for the German Marktanreizprogramm (Market Rebate Programme for Renewable Energies) requires an energy yield of 525 kWh/m2 and year, pursuant to the so-called BMWi frame conditions. Because the European countries did not use one standard calculation method for their incentive programmes, every national incentive scheme had its own method to calculate the output. Now, the Swedish testing authority SP developed in its QAiST (Quality Assurance in Solar Heating and Cooling Technology) project an Excel-based tool to calculate the energy output for solar collectors under arbitrary climate conditions. The Solar Keymark Network has approved the Excel programme as a valid tool and has agreed to include its calculation results on the Solar Keymark data sheets of any certified collector. Until now, however, this has not changed the differing requirements of the national incentive schemes. “We have provided a basis,” Drück says. The next step will be to convince the decision makers of the incentive schemes to accept the results determined by the new calculation method as a common basis for their incentive schemes.

The members of the network have also expressed the need for a common worldwide certification process. A working group was set up to deal with this issue. A second working group will develop testing criteria for the freeze resistance of heat pipes in vacuum tube collectors.