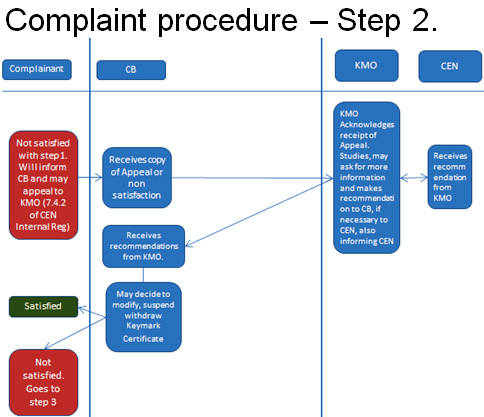 The Solar Keymark Network (SKN) discussed and approved new complaint procedures during its most recent meeting on the Greek island of Crete in mid-October 2016. Action had to be taken, as the first series of complaints filed in late 2015 against Swedish test lab SP about the certificates of Danish collector manufacturer Arcon-Sunmark was not resolved to the satisfaction of all parties involved. The results of the October meeting are described in a publicly available draft of the minutes on the SKN webpage.
“A working group with representatives from all members of the SKN had been preparing improved complaint procedures. After much work and long discussions, a compromise was found and it was approved during our network meeting in Greece,” said Jaime Fernández González-Granda, Chair of the Solar Keymark Network.
New four-step complaint process
The new core element of the revised complaint procedures is a four-step model in which an Advisory Complaint Committee (ACC) will play a key role.
Step 0 starts with the Certification Body responding to the complainant. If the response is not deemed satisfactory, the complainant may submit his or her complaint to SKN’s head of Certification Bodies. This stage, which is called step 1, is the one where the ACC comes into play. The ACC consists of a representative of ESTIF, the SKN manager, the SKN chair, the head of the Certification Bodies Working Group and a representative from the laboratories running tests. Any member who has a conflict of interest regarding any of the other parties involved will be replaced by someone else. The ACC reviews the complaint and the results from Step 0 and draws up a proposal which is sent to the head of the Certification Bodies Working Group, who will then make a recommendation to the parties involved.
“Certainly, our main objective is to find a solution acceptable to both the complainant and the certification body without escalating the conflict to higher levels of the programme,” explained González-Granda. It is therefore possible to implement a Third-Party Team as early as Step 0. This team may consist of representatives from a variety of test labs or inspection bodies, in order to provide transparency during any new testing or inspection.
If the issue cannot be resolved at this stage and the outcomes of step 0 and 1 are still unsatisfactory, the complainant can address the Keymark Management Organisation (KMO) on behalf of CEN (Comité Européen de Normalisation) to guarantee open competition (step 2). After studying the case, KMO will make a recommendation to the parties involved. If this recommendation is not enough to put the issue to rest, the complainant can enter the last stage (step 3) of the complaint process and contact CEN-CENELEC directly (CENELEC = the European Committee for Electrotechnical Standardization). As the owner of the mark, CEN-CENELEC has the power to make a final decision and even rule against the responsible certification body.
The new Keymark Scheme Rules undergo the usual procedure for formal approval by KMO and are expected to be publicly available before the end of this year on solarkeymark.org.
10 % rule tackled in new working group
The revised complaint procedures were developed by a working group and discussed in four online meetings between April and October this year. There was not enough time to work on the improved 10 % rule, which is why the SKN decided to create a new working group and submit a project during the most recent call for proposals by the Solar Certification Fund (SCF). The 10 % rule allows for a yield tolerance of up to 10 % below or above original system performance in solar collector retesting. Industry stakeholders have emphasised that a 10 % variation was too high when putting large-scale systems out to tender, as investors would need information on the output of the system. “The 10 % rule is a technical issue that will require dedication from test laboratories. So we decided at our last SKN meeting to use SCF funding to tackle the issue in a new working group,” said González-Granda. The results are expected to be discussed and approved during SKN’s spring meeting on 7 March next year in Freiburg, Germany.
Websites of institutions and programmes mentioned in this article:
Solar Keymark Network: http://www.estif.org/solarkeymarknew/network/sknmeetings
Minutes of Solar Keymark Network Meeting for download: http://www.estif.org/solarkeymarknew/network/sknmeetings
Solar Keymark Certificate: http://www.estif.org/solarkeymarknew/index.php
Latest Solar Certification Fund call for proposals: http://www.estif.org/solarkeymarknew/images/downloads/SCF/8thSCFcall/SCF_N0020R3_8thCallText.pdf
KMO website: http://www.dincertco.de/keymark_en
CEN website: http://www.cen.eu
CEN-CENELEC: http://www.cencenelec.eu/Pages/default.aspx