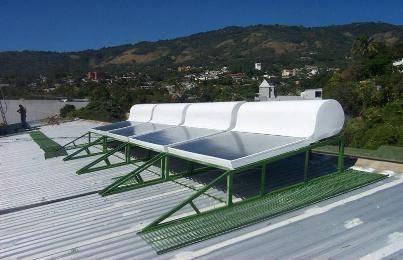 Despite its relatively small population of 6.2 million inhabitants and its total area of barely 21,000 km², which is half the size of The Netherlands, El Salvador shows potential for growth: The solar thermal market in the Central American country offers opportunities both at public health units and in the hotel sector. The country’s high fossil fuel dependency (41 % of its electricity is generated using diesel), high irradiation and lofty electricity prices (around 0.2 USD/kWh) are creating an increasingly attractive market for technologies such as solar water heating. A new energy efficiency law is underway and may provide extra incentives for solar thermal technologies. The photo shows a hot water system at the Hospital de Diagnòstico in San Salvador.
Photo: Tecnosolar
Arturo Solano, the owner of Tecnosolar, one of the main solar thermal and PV installers in the country, explains: “The hotel and commercial sector is increasingly implementing this technology, even without any public incentives.” Actually, Solano’s company has so far supplied and installed solar heaters at around 20 hotels around the country and has set up five systems at commercial and industrial facilities. In the residential segment, Tecnosolar says it has installed almost 20 systems over the last three years.
Solar water heaters for hotels payback in 4 to 6 years
It seems clear to Solano where the interest among the commercial sector comes from: “Commercial and industrial electricity tariffs in El Salvador are one of the highest in Central America, since most of the water heaters are powered by electricity. A solar heater is becoming an option for people to save money.” According to the head of Tecnosolar, an average system at a hotel may have a payback period of between 4 and 6 years without subsidies.
Still, the private sector is not the only sector to have discovered solar thermal heating: Since 2010, the Consejo Nacional de Energía (CNE) has invested some USD 4.3 million to improve the energy efficiency of public health units. As a result, nine hospitals and health centres have implemented efficiency measures, which include solar water heaters. According to a CNE report from April 2014, these actions are currently saving the government some USD 125,000 annually in electricity bills.
Good experiences encouraging government’s support
Tecnosolar itself installed one of these solar systems. The rooftop of Santa Ana’s regional hospital San Juan de Dios, which was completed in November 2012, has 48 Chromagen collectors from Israel and two water tanks that can hold 3,000 litres each. According to a November 2012 news piece from daily newspaper La Prensa Gráfica, the system cost around USD 100,000 and saves USD 22,000 per year in electricity bills. “In less than five years, the system will be paid off. These experiences are encouraging the government to strengthen its support for this technology,” Solano says.
Energy Efficiency Law under discussion
In fact, last April, the President of CNE, Armando Flores, submitted the draft for an Energy Efficiency Law (Ley de Eficiencia Energética) on new energy efficiency measures to El Salvador’s Legislative Assembly. Although the content of this bill has not been specified yet, Solano, who also heads the Salvadoran Association for Renewable Energies, ASER, believes that the new law will make solar water heaters compulsory not only in hospitals, but in most public buildings, as well as offer soft loans and tax incentives to private customers. The bill is currently under discussion.
Regarding the currently installed solar thermal capacity, Solano acknowledges that there are no official statistics available, although he sees constant and steady growth. “We intend to carry out a study on the number of installed solar thermal systems within ASER. It is important to us to know the point we have reached in order to negotiate with the government,” Solano concludes.
More information:
Tecnosolar: http://www.asolanosolar.com/calentadores_para_hoteles_y_hostales
Salvadorian Renewable Energy Association: aser.org.sv/index.html
Energy Efficiency Law: http://www.suelosolar.es/newsolares/newsol.asp?id=9752
http://www.elsalvador.com/mwedh/nota/nota_completa.asp?idCat=47861&idArt=8742002