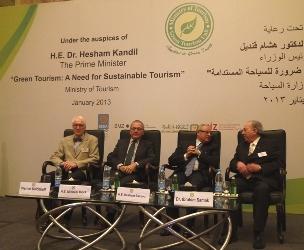 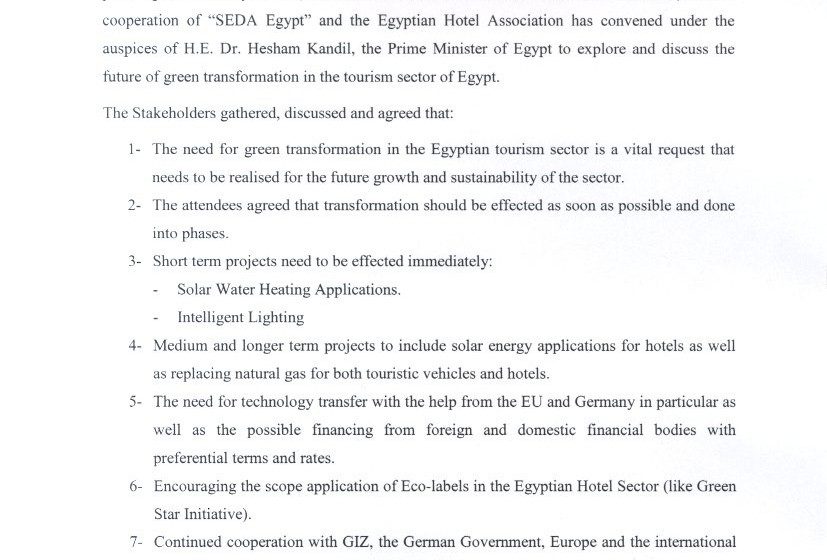 While Egypt is still making headlines for its unstable political situation since the revolution almost two years ago, there seems to be a newly emerging political commitment to solar thermal energy. On 22 January, the Egyptian Minister of Tourism, Hisham Zaazou, announced a solar water heating programme for the hotel sector at Cairo's “Green Energy: A Need for Sustainable Tourism” conference. The recommendations which the minister presented to more than 300 conference participants had been developed together with the German Agency for International Cooperation, GIZ, and the Egyptian Solar Energy Development Association (SEDA). “The need for green transformation in the Egyptian tourism sector is a vital request that needs to be realised for the future growth and sustainability of the sector,” it says in the final declaration (see the attached document). Among the short-term projects that need to be started immediately is an obligation for hot water production and energy-efficient lighting in hotels. The photo shows the speakers of the main panel during the conference (from left): Werner Koldehoff, German consultant, Michael Bock, German Ambassador to Egypt, Hisham Zaazou, Minister of Tourism, and Dr Ibrahim Samak, Managing Director of German company Engcotec.
Photo: GIZ

“Egypt is facing severe problems with its energy supply,” SEDA member Muhammad El Saadawy emphasisedduring a presentation at the international solar thermal industry conference SMEThermal 2013 in Berlin at the end of January. “The country became a net oil importer in 2008 and will become a net gas importer in the next decade,” he added. Egypt spends Egyptian Pound (EGP) 100 billion per year or about 20% of its overall budget on energy subsidies. “The Egyptian government is prepared to change the way it subsidises energy. It is planning to take away the grants step by step,” El Saadawy said. For example, electricity prices will double in the commercial sector on 1 July, making solar water heaters an even more attractive investment (see chart below, Source: SEDA).

The long-term aim of the hotel sector’s solar initiative is to supply solar-heated water to 100,000 rooms over the next 5 years. SEDA believes that this measure will create 3,000 new jobs and save the country EGP 164 million (around EUR 18 million) in energy subsidies. It is now up to the government to implement the necessary directives and make the initiative mandatory in the hotel sector already in 2013. SEDA comes prepared: it has developed a working scheme for the green tourism initiative, which is planned to fund 25 % of the costs of feasibility studies, designed a bank loan and drawn up an accreditation committee, which would assign green labels to hotels fulfilling the solar mandatory law. SEDA has already discussed its proposal with four other ministries besides the Ministry of Tourism: the Ministry of State for Environment Affairs, the Ministry of Planning and International Cooperation, the Ministry of Industry and Trade and the Ministry of Housing. SEDA´s argument,“ Making solar energy the standard for water heating will create jobs and save the government money”, seems fairly convincing and gained momentum at the large conference in Cairo Mid January.

The next challenge will be to build up a solar thermal industry in Egypt. In Berlin, El Saadawy invited European collector and tank manufacturers to come to Egypt and start shipping or producing solar water heaters. “We have not yet had any quality producers in the country,” he admitted during his presentation and pointed out that the Egyptian government offers foreign investors free land and good frame conditions.