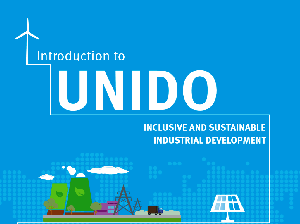 The United Nations Industrial Development Organization (UNIDO) started two projects in the first quarter of this year with the aim of increasing the deployment of solar process heat: January of 2015 marked the launch of a 5-year programme in cooperation with the Indian Ministry of New and Renewable Energy (MNRE) to promote business models for an increased market penetration and scale of concentrated solar thermal heating and cooling applications. Three months later, UNIDO launched the 5-year programme Utilizing Solar Energy for Industrial Process Heat in Egyptian Industry together with the Egyptian Ministry of Industry, Trade and Small and Medium Enterprises. Both projects are funded by the Global Environment Facility (GEF).
Figure: UNIDO
India: Focus on larger collector fields at high temperatures
The Indian programme aims at facilitating the installation of 45,000 m² of concentrating solar collector area by setting up 15 to 25 demonstration and 60 replication projects. In addition, the initiative’s goal is to provide info material on the technology’s application and standardise concentrating collector performance measurement. Budget outlay including co-financing amounts to USD 26,191,044. The Indian Renewable Energy Development Agency (IREDA) will soon launch a low-interest loan scheme for projects in industrial solar process heat.
The coordination with the programme Market Development and Promotion of Solar Concentrator based Process Heat Applications, which started in 2012, will be ensured by the MNRE, which “acts as the line ministry for both projects,” explains Mark Draeck, Industrial Development Officer at UNIDO´s headquarters in Vienna, Austria. “Essentially, the UNIDO project will focus on industrial applications, larger absorber areas and higher temperatures wherever feasible, and have the tailored financing instrument in place.” According to Draeck, the project will be provided with monitoring as well as support for O&M, as the latter is still one of the critical issues.
Tarun Kapoor, Joint Secretary at the MNRE, guaranteed the Indian government’s full support for the success of the project during a workshop in New Delhi in July. Kapoor called upon the industry associations to promote this technology among their members: “100 to 200 systems must be developed in each cluster, and this mass utilisation will lead to the reduction in costs in a similar fashion as the photovoltaic industry is witnessing. As the industrial cost of power is on the rise, concentrated solar must use this opportunity to meet the increasing demand.”
Egypt: Focus on training and quality assurance in manufacturing
The Egyptian UNIDO project is worth a total of USD 6.5 million and aims at generating further investments in solar thermal use in the industrial sector. According to Rana Ghoneim, UNIDO Industrial Development Officer at the Vienna headquarter, the programme includes several measures:
“The new project will be instrumental in building the capacity of the local supply chain for manufacturing solar thermal energy in Egypt and is expected to contribute to creating new jobs and support entrepreneurship in the renewable energy sector,” Industry Minister Mounir Fakhry Abdel Nour said during the launch of the UNIDO project in Cairo in March.
More information:
Industrial Development Officer, Rural and Renewable Energy Unit, Energy Branch: Mark Draeck, m.draeck@unido.org
National Project Manager UNIDO India: Dr Anil Misra, a.k.misra@unido.org
National Project Manager UNIDO Egypt: Rana Ghoneim, r.ghoneim@unido.org