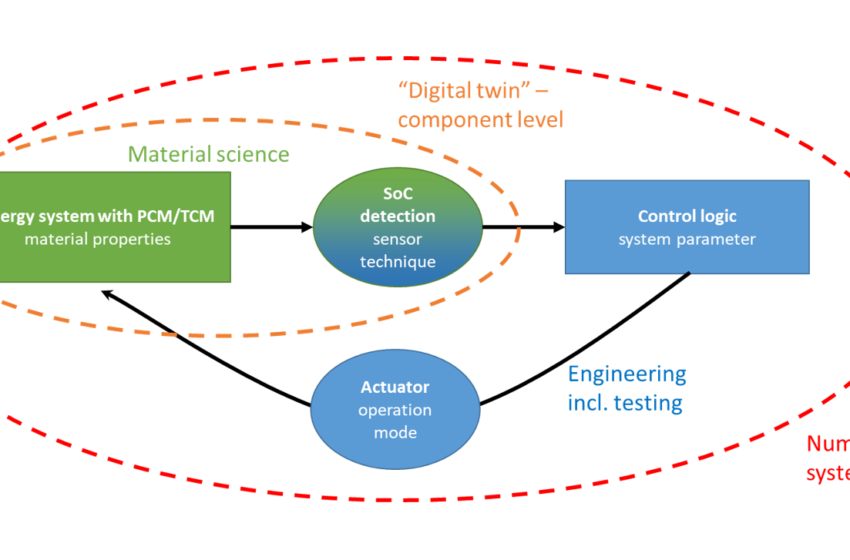 The IEA Solar Heating and Cooling Programme has redoubled its efforts to develop and test compact thermal energy storage (CTES), saying the technology can play an important role in transforming the energy market. At its meeting in June, the IEA SHC Executive Committee approved the start of a new research platform titled Task 67 – Compact Thermal Energy Storage Materials within Components. So far, nearly 50 researchers from 14 countries have signed onto the venture, which will be led by Wim van Helden, of AEE INTEC, Austria. Van Helden was also the head of Task 58, Material and Component Development for Thermal Energy Storage, which ended in December 2019. The kick-off meeting for the new three-year CTES research platform is set for October 2021. The chart shows the approach task members will take to developing novel state-of-charge measuring techniques.
Chart: Task 67
“Task 58 gave us the first insights into how storage materials interact with heat exchangers or reactors. But coming up with new designs for well-performing, reliable and affordable CTES is still very much an uphill battle,” said van Helden. The aim of the new research collaboration is to take a closer look at material-component interactions and improve testing and characterisation methods used to evaluate the performance of existing heat exchanger and reactor materials. At a preparatory meeting in March, the researchers agreed on the following four primary objectives, which will form the basis for their three-year work plan:
“As in the previous CTES tasks, we will work to standardise measurement procedures using round robin tests,” said van Helden. “We’ll conduct several rounds of tests, each time focusing on another property of the materials under study. Key properties include thermal conductivity and diffusivity, entropy changes and thermal expansion and – if the material comes in powder form – heat capacity.”

Round robin tests help to harmonize and stabilize results of performance tests between different labs Image: Task 67
The future project members also said they want to update and expand existing databases on materials and allow for knowledge sharing. By this they mean, first of all, an update and expansion of the PCM database found at https://www.thermalmaterials.org/. It contains the results from testing several types of PCM, as well as a glossary to ensure consistency in the use of terms describing test procedures, test results and general CTES findings. “This will be an ongoing task during the three-year duration of the project. We’ve also been discussing how to expand the database to include TCMs,” said van Helden.
In addition, Task 67 will investigate how stable PCMs and TCMs really are. “The idea is that we look into the causes of material degradation after a system has gone through, let’s say, 100 or 1,000 charge-discharge cycles,” explained van Helden. Then the group will subsequently draw up a list of recommendations about how to determine the stability of materials and conduct round robin tests to compare different cyclability-stability test methods.
Van Helden is confident Task 67 will reach its ambitious goals. Not only has it attracted a great deal of interest from CTES specialists around the world. But as the former leader of Task 58, he also knows how successful a collaboration between component and system designers and materials researchers can be. And a planned partnership with the IEA Energy Conservation through Energy Storage Program could give the new project yet another boost.
If you want to know more about Task 67, please contact Wim van Helden, AEE INTEC, Austria:
w.vanhelden@aee.at
More information: https://task58.iea-shc.org
Publications on IEA SHC Task 58 Material & Components for Thermal Energy Storage: https://task58.iea-shc.org/publications