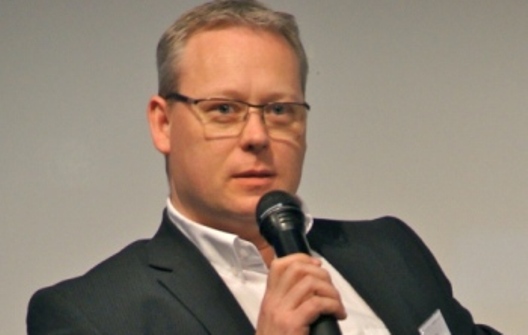 Strong competition and best cost/performance ratios have made the Danish district heating market one of the most successful case studies within the European solar thermal market. The two key features of the Danish model are the cost-optimised large solar fields above 10,000 m² with prices as low as 200 EUR/m², including installation, and the low interest rates for the investment with only 3 % over the expected lifetime of the system of at least 20 years. The resulting heat price is as low as 31 EUR/MWh, beating by far the heat price of a gas-fired district heating plant. Søren Elisiussen, CEO of Arcon, a Danish collector manufacturer and large-scale turnkey solar systems provider, explained his business case during the panel discussion New Business Models for the Solar Thermal Industry at the international conference SMEThermal 2014 in Berlin, Germany, on 18 February 2014.
Photo: Stephanie Banse

“To us, it is absolutely crucial to continuously optimise the cost/performance ratio. A large number of our projects in Denmark are put out to tender because of the high amount of money involved,” Elisiussen explained. ”So, we tender for the projects, and the company offering the best feasibility wins the projects.” According to the CEO, Arcon had managed to drive down costs and to improve the cost/performance ratio by around 50 % over the last 5 years. This was made possible by optimising production and choosing the very best materials. “We want to produce the best collector quality with an expected lifetime of at least 25 years,” Elisiussen emphasised. Arcon can look back at 40 years in the solar thermal business and the company has installations which are already 25 years old and are still running. “We actually engaged an institute to open some of the 20-year-old collectors and estimate the remaining lifetime. Based on the erosion inside the collector pipes, the answer was ‘at least 30 years lifetime’, because there was actually no measurable wear to be noted within the copper tubes,” Elisiussen explained during the panel discussion.
Regarding installation, it is also Arcon’s goal to set up large collector fields in the shortest time possible. The CEO mentioned a current project with a 12,000 m² field in Grenaa, Denmark, which was installed in less than four weeks – including the foundation for the support system and the flexible piping between collectors. This means that, on average, 500 m² of collector area were set up per day.
The table shows the key figures of a typical Danish district heating project with an average collector field size of 10,000 m² and an existing storage tank.
Source: PlanEnergi / Arcon, Denmark
The resulting heat price at 31 MWh is very competitive compared to district heating networks based on fossil fuels (see the table above). “To run these fields successfully over a long period, you have to understand the complexity of the system,” Elisiussen replied to the question of whether this business model was exportable to places such as Eastern Europe, where huge district heating networks are available. “It is very important to distribute and control the water in the correct way in these huge fields to absolutely avoid spot building or stagnation somewhere in the field,” the CEO added during the panel discussion. The second crucial point was the integration of the field into the district heating plant. Every district heating plant was different, and it was very much influenced by the operator. “I came from the turbine industry where there is no human intervention when feeding into the grid, but operators of district heating networks can adjust operating conditions, for example, start combined heat and power plants if the electricity price is high. The heat will then flow into the network and therefore change the operating conditions for collectors feeding into the same network.”
Elisiussen emphasised that the complexity of the district heating plants had to be understood to ensure an optimal and trouble-free operation of the collector field. Arcon’s rule of thumb was that the solar share in district heating plants with traditional storage solutions should be no more than 25 %. Seasonal storage made it possible to increase the solar share to above 50 %.
More information:
http://www.arcon.dk
http://www.planenergi.dk/