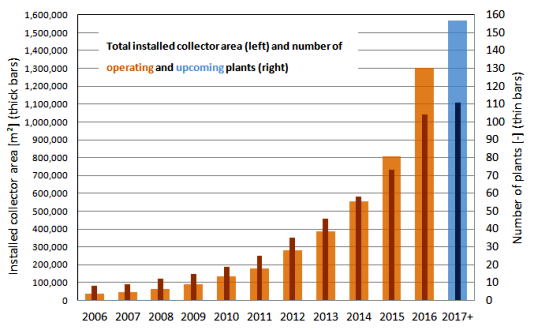 Last year was a record-breaking one for new solar district heating (SDH) installations in Denmark. With 31 new SDH systems and 5 plant expansions, the newly installed collector area grew at double the rate of 2015 and totalled 495,226 m² (347 MWth). The year prior saw 15 plants built and three expanded, while collector area increased by 250,161 m² (175 MWth). Almost all plants newly installed or expanded in 2016 were equipped with flat plate collectors, except for the 18.9 MWth parabolic trough installation in Brønderslev. The annual statistic on SDH installations is maintained by Daniel Trier from Danish consultancy PlanEnergi and starts with the very first large SDH plant in 1988. Trier said that at the end of 2016, there had been 104 SDH plants in operation with a combined collector area of 1.3 million m² (911 MWth).
Chart: PlanEnergi
One of the new Danish installations is also the world´s largest solar thermal plant to date. Its capacity is 110 MWth (156,694 m²) and it was set up by Danish turnkey supplier Arcon-Sunmark in Silkeborg. Arcon-Sunmark was the one supplying 88 % of the newly installed collector area in 2016, as PlanEnergi statistics show. Five plants and one expansion were delivered by other suppliers. Finnish-based Savo-Solar had been tasked with the Jelling (15,290 m²), Jyderup (9,239 m²) and Søllested (4,701 m²) projects and the Løgumkloster expansion (5,576 m²). Danish turnkey supplier Aalborg CSP completed Brønderslev (26,929 m²) and Havdrup (2,569 m²).
Average system size – without Silkeborg – was around 9,700 m². Including Silkeborg, the average size increased to around 13,800 m² in 2016 compared to 13,900 m² the year prior.
In many ways, the Danish showcase in solar district heating is unique, – for example, there are many user-owned non-profit cooperatives which run district heating systems in the country. These utilities additionally benefit from smart financing based on loans for which the municipality is the guarantor. Plant space is not an issue either, making cost-effective support structures on meadows the dominating mounting technology for the huge fields typical of the systems installed in Denmark. Moreover, the nation’s main turnkey supplier, Arcon-Sunmark, had improved the cost-performance ratio by around 50 % over the last five years, CEO Søren Elisiussen said at a conference in 2014.
End of energy-saving agreement prompts rush to complete projects
The peak in SDH installations in Denmark last year was likewise caused by the end of the 2012 energy-saving agreement between Danish district heating companies and Denmark’s energy ministry expected for December 2016. The uncertainty whether solar heat would again be part of a new agreement with the government had prompted several utilities to have their SDH systems completed by the end of last year. “This regulation had an impact on SDH similar to indirect discounts: to avoid penalties which must be paid if saving targets are not met or sell excess solar heat to other utilities,” explained Trier.
“I doubt that we will even come close this year to the record numbers of 2016,” said Jan-Olof Dalenbäck from Chalmers University of Technology, Sweden. Dalenbäck is the one who has been keeping track of large-scale solar heating and cooling installations above 350 kW in Europe. His end-of-2016 statistics showed 290 plants – for SDH, but also industrial processes or cooling – totalling 1.57 million m² (1,102 MWth).
Considering Trier’s statistics, the announced capacities for the coming years are indeed “significantly below the ones of the first quarter of 2016,” meaning market growth is expected to slow down this year.
The new agreement on energy-saving efforts was signed by the energy companies and the Danish energy ministry on 16 December 2016 (see the attached document). Regarding district heating businesses, it sets a target of saving “3.18 % of the final adjusted energy consumption (…) plus 40 % of the net loss in the district heating system” between 2016 and 2020 (paragraph 4.2 on p. 14).
The article crucial for SDH is 3.8, where it says that solar heat fed into district heating networks can be added to the overall saving amount if the collector field enters the planning phase no later than 30 June 2018 and is installed by 30 June 2019. It gives municipal district heating companies an incentive to plan new or extended SDH systems before mid-2018 in order to fulfil the new obligation.
Websites of organisations mentioned in this article:
PlanEnergi: http://planenergi.eu/
Chalmers University of Technology: http://www.chalmers.se/en
List of Danish solar heating plants: http://www.solvarmedata.dk/
Arcon-Sunmark: http://www.arcon-sunmark.dk
https://solarthermalworld.org/wp-content/uploads/2017/04/denmark_district_heating_2016.pdf