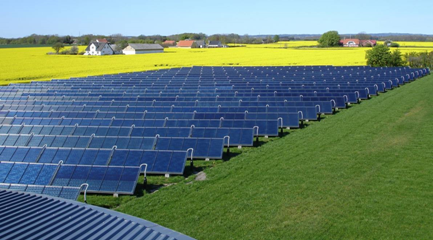 In Denmark, there are currently around 576,000 m² of solar collectors providing 403 MW of thermal power to 61 district heating systems. Another 28 plants with 395 MW and 564,000 m² of collector area are in the pipeline, according to a presentation held by Danish consultant Per Kristensen at the SDH conference in Toulouse in June 2015. Widely replicable plant concepts are part of the success story.

Source: Arcon-Sunmark
According to Kristensen, one key factor for the success is the motto: “Make it large, but keep it simple.” The plant design is basically the same for most of them. Standards have evolved over time, and building a solar thermal plant is a turnkey routine. “For more than ten years, performance guarantees have been a standard in turnkey district heating plants,” says Per Alex Sørensen from PlanEnergi. Virtually all district heating companies interested in solar plants ask in their tender invitations for a performance guarantee, as well as for collector test results from an accredited institute.
Usually, a guarantee on the life of the collectors is included as well. The dilemma with it: Collector life would be 20 to 25 years. This makes guarantee issues for manufacturers difficult to handle. Hence, guarantees are normally given similar to the ones in the Danish construction sector: After five years, the collector is visually inspected for damages. In Danish systems, particularly the Teflon foil on the front side will be examined.
On http://www.solar-district-heating.eu, PlanEnergi engineers have published guidelines on how performance guarantees work, both for turnkey providers and customers (see the attached document). Within Denmark, providers and customers adhere to the processes described by them.
Guaranteed instant performance under full load
The guidelines suggest giving a performance guarantee as an equation which specifies the instant output of the collector field under stationary operating conditions. These conditions under full load consist of the irradiance on the collector plane, the ambient air temperature and the input and output temperature of the collector field. A safety factor is used for measurement errors. When the installation of the plant has been completed, performance will be checked according to the measurement procedure described by the guidelines. Typically, measurement is done by a consultant (if there is one) or together by the turnkey provider and the utility’s staff. If the guarantee is not met, the turnkey provider will have to optimise the plant to meet the target. “If the guarantee still cannot be made after optimisation, an independent institution would verify results. If the target is really not met, the customer and the turnkey provider would either have to find an agreement or go to court about the plant. But until now, this has never happened,” says Sørensen.
Ramp-up time to optimal operation may take up to one year
The guidelines also include a performance guarantee for the heat exchanger in the collector loop. It guarantees that the temperature difference between the primary (=solar) side of the heat exchanger and its the secondary side (= district heating system, normally water in the storage) will not exceed a certain value, e.g. 3.5 Kelvin at a certain transferred power (usually, at full load). This guarantee is important, as a higher temperature difference means that heat is not transferred well from the collector circuit to the secondary side, which would result in lower solar yields. As with the solar field, the guarantee for the heat exchanger will be put to the test after completion of the plant.
The performance guarantees must not be mistaken as an output guarantee for the plant during actual operation. The actual solar yield depends on several operation variables which cannot be influenced by the turnkey provider, whose responsibility ends with plant delivery. “The ramp-up time after delivery – until the plant is at optimum operation – takes between two weeks and one year,” says Sørensen.
More information:
http://www.solar-district-heating.eu
http://www.planenergi.dk/
https://solarthermalworld.org/wp-content/uploads/2015/09/sdh-performance_guarantee_denmark.pdf